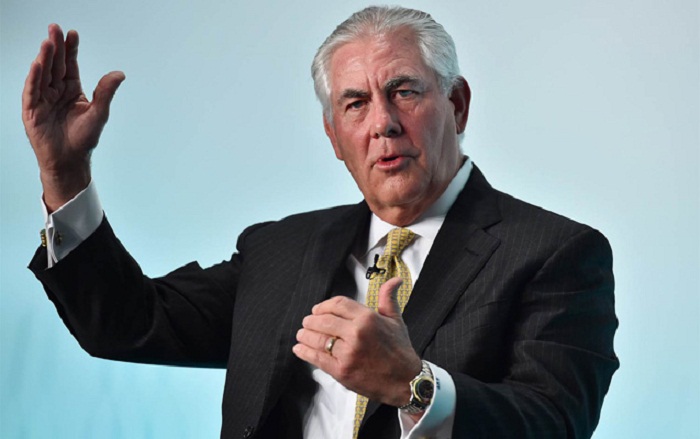 Oil executive Rex Tillerson is likely to be nominated by Donald Trump for secretary of state, lifting the Exxon Mobil chief executive who has ties to Russian president Vladimir Putin into consideration for the most senior US diplomat.

The president-elect met Tillerson for the second time in less than a week on Saturday morning, a campaign spokeswoman told the Guardian.

Jason Miller, the transition team spokesman, did not confirm or deny the reported selection of Tillerson, using Twitter to say: “No announcements on Secretary of State until next week at the earliest.”

The news leaked less than a day after reports that US intelligence officials had concluded that the Kremlin tried to intervene in the 2016 election to help Trump defeat Hillary Clinton, according to officials quoted anonymously in the Washington Post and New York Times.

Republicans disputed those findings. Earlier on Friday, Barack Obama ordered the agencies to review all evidence about Russian interference in the election, including hacks on political organizations including the Democratic National Committee.

Trump has repeatedly praised Putin, and said he would like to restore US-Russia relations and work with Russian counterparts against international terrorism.

Each of those candidates faded in turn: Romney over his past opposition to Trump, Petraeus regarding his guilty plea to leaking confidential information and Giuliani for his consulting work for clients abroad.

Trump met Tillerson on Tuesday at Trump Tower in Manhattan, and again on Saturday.

In a decade leading Exxon Mobil, for which he has worked for 41 years, Tillerson has cut deals around the world, including several projects with Russia’s state-owned oil giant, Rosneft.

Economic sanctions against Russia have hindered Exxon’s work with Rosneft, and Tillerson has spoken out against them. A 2011 deal with Rosneft, to access Arctic oil reserves, could be worth as much as $500bn, Putin said at the time.

In 2013, the Kremlin gave Tillerson an Order of Friendship award. A year later, after the US and European Union placed sanctions on Russia over its annexation of Crimea and military action in Ukraine, Tillerson said the policy was harmful.

“We always encourage the people who are making those decisions to consider the very broad collateral damage of who are they really harming with sanctions,” he told shareholders at the company’s annual meeting.

On Saturday, former ambassador to Russia Michael McFaul noted that Tillerson was “very close” to Igor Sechin, CEO of Rosneft, a former deputy prime minister and a friend of Putin since the 1990s. Sechin was directly targeted by US sanctions in 2014.

At the army-navy football game in Baltimore on Saturday, which Trump also attended, Republican senator John McCain said he had concerns about Tillerson’s relationship with Russia.

“What about all the other things: right now the targeting of hospitals by Russian aircraft with precision weapons in Syria, in Aleppo?” the party’s 2008 nominee told CNN.

“Those are the kind of questions that we need to ask about the relationship with Vladimir Putin.”

Potential conflicts of interest would likely arise at Tillerson’s confirmation hearings with the Senate. So would the subject of climate change.

Exxon Mobil has operations in more than 50 nations and has partnered with Qatar’s state oil company, Qatar Petroleum, on a project to build a natural gas terminal on the Gulf of Mexico.

Tillerson has acknowledged the threat of climate change and Exxon Mobil has endorsed a carbon tax and stated its support for the Paris climate agreement.

The company is also under investigation for misleading investors about what it knew about climate change.

Trump has appointed a Scott Pruitt, a climate change denier, to head the Environmental Protection Agency.