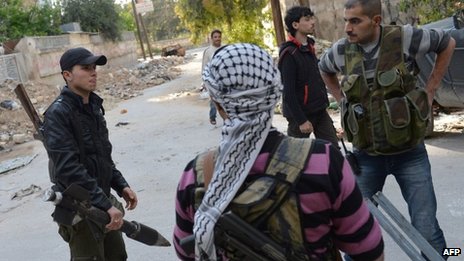 European Union foreign ministers are to discuss British and French calls for them to ease sanctions against Syria so weapons can be supplied to the rebels.
At a meeting in Brussels, UK Foreign Secretary William Hague is expected to argue that the current sanctions regime, which is due to expire at the end of this week, is no longer working.

He wants it amended so arms can be sent to "moderate" forces in the opposition.

However, several EU states are totally opposed to ending the arms embargo.

Earlier, Syria`s foreign minister confirmed the government would "in principle" attend an international peace conference which the US and Russia hope will take place in Geneva next month.

Walid Muallem said it would be "a good opportunity for a political solution" to the conflict, which the UN says has left more than 80,000 people dead.

Members of the main opposition coalition are currently discussing whether to attend the conference, but spokesmen have said they would if President Bashar al-Assad agreed to step down.