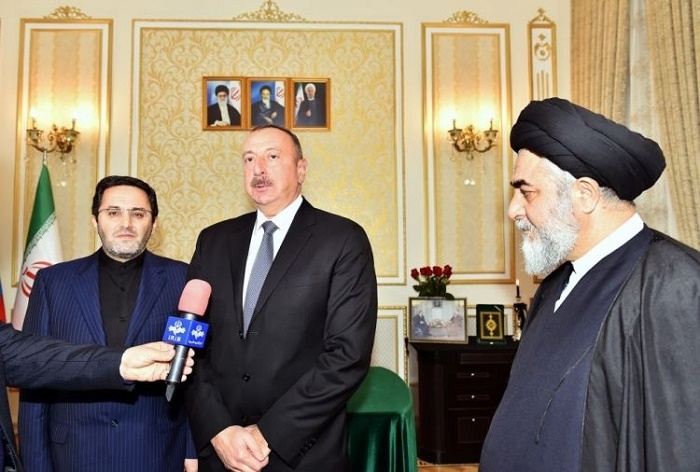 Iran’s former President Ayatollah Ali Akbar Hashemi Rafsanjani was a big supporter of the development of relations between Azerbaijan and Iran, Azerbaijani President Ilham Aliyev said in an interview with a reporter of the Baku office of the National Iranian Radio and Television.

President Aliyev on Tuesday visited the Iranian Embassy in Baku to express condolences over Rafsanjani’s death. The president signed a book of condolences, AzVision.az reports.

In his interview, the president, on behalf of the Azerbaijani people, expressed condolences to the brotherly people of Iran over Rafsanjani’s death.

“Rafsanjani played a very important role in the development of the Islamic Republic of Iran, did great work and left an indelible mark. The Iranian people also praised his contributions,” said President Aliyev.

“My father, President Heydar Aliyev had close friendly relations with Rafsanjani. They together laid the foundation of relations between Iran and Azerbaijan,” he said.

“I remember the meetings Rafsanjani held with President Heydar Aliyev during his visits to Azerbaijan. I took part in some of these meetings,” the president added. “I personally witnessed mutual respect between them. I met with Mr Rafsanjani during one of my visits to Tehran after being elected as the president of Azerbaijan. The meeting made a very good impression on me.”

“Rafsanjani was really a great statesman, a wise politician, and was very devoted to the people of Iran,” the Azerbaijani president noted. “He did a lot for the development of relations between Azerbaijan and Iran.”

“I will further strive with my respected Iranian counterpart Rouhani to develop friendly and fraternal relations between the two countries,” President Aliyev added.