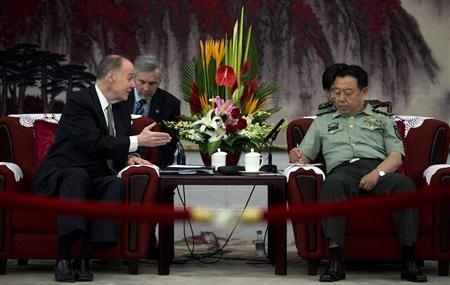 The United States called for deeper military ties with China on Tuesday, including working closer together in areas like peacekeeping, fighting piracy and disaster relief, despite growing tensions between the two on a range of security issues.
White House National Security Adviser Tom Donilon made the remarks at a meeting with senior Chinese military leader Fan Changlong, two weeks ahead of a summit between the U.S. and Chinese presidents in California.

"An essential part of building a new model for relations between great powers is ensuring we have a healthy, stable and reliable military to military relationship," Donilon told Fan at the Chinese Defence Ministry, in brief comments before reporters.

He added the two countries should work to face "non-traditional security challenges" including peacekeeping, disaster relief and countering piracy.

Neither Donilon nor Fan mentioned the numerous sensitive areas Chinese President Xi Jinping and U.S. President Barack Obama are expected to discuss in June, including tensions on the Korean peninsula and a string of cyber attacks the United States has linked to China.

Donilon met Xi on Monday, during which Xi said Sino-U.S. relations were at "an important stage connecting the past and the future", according to China`s official Xinhua news agency.

Neither side has given details about what will be discussed at the summit, set for June 7-8 at a sprawling California estate called Sunnylands, which lies southeast of Palm Springs.

While military relations between the world`s two largest economies have thawed considerably in the last two years, deep suspicions and sticking points remain, including China`s role in pushing North Korea to abandon its nuclear weapons program.

Fan and Xi both met with Choe Ryong-hae, a special envoy of North Korean leader Kim Jong-un, earlier this month. The U.S. will likely continue pressuring China to enforce international sanctions on Pyongyang.