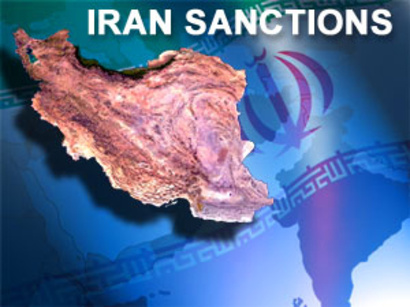 The United States relaxed sanctions on Iran on Thursday to allow American companies to sell mobile phones, software and other technology used for personal communications to Iranians.
The move announced by the U.S. Treasury Department allows Iranians to get access to the latest Apple phones and newest software that have only been available on Tehran`s black market since sanctions were first imposed in 1992.

Also on Thursday, the Treasury Department said it had blacklisted Iranian government groups and officials accused of abusing human rights, including a committee the United States said censors news and other information.

The United States has ramped up tough measures against Iran in recent years to slow development of the Islamic Republic`s disputed nuclear program, blacklisting a wide range of Iranian companies and government officials.

The United States believes Iran is enriching uranium to levels that could be used in nuclear weapons, but Tehran says its program is for peaceful purposes.

The easing of sanctions on technology may be an attempt by the U.S. government to develop goodwill with Iranian citizens before the Iranian national elections next month.

"As the Iranian government attempts to silence its people by cutting off their communication with each other and the rest of the world, the United States will continue to take action to help the Iranian people exercise their universal human rights, including the right to freedom of expression," Treasury said in a statement.

Social media played a big role in the wake of Iran`s disputed 2009 presidential elections, used by the opposition "Green Movement" to marshal global attention to their cause, and later inspiring protesters in the Arab Spring revolts of 2011.

The Iranian government has taken steps to curb access to the Internet in the last few months, apparently determined to prevent a repeat of the unrest that followed elections, the worst in the country since the 1979 Islamic revolution.

The U.S. government first eased some technology restrictions in 2010, allowing U.S. companies to export to Iran some basic software and free Internet services such as chat and email.

But the move on Thursday goes further, allowing companies to sell software and hardware to Iranian citizens, Wendy Sherman, undersecretary for political affairs at the State Department, said in an interview on the BBC Persian service late on Wednesday.

The U.S. Treasury issued a general license on sales of personal technology to Iran, which would ease restrictions but leave sanctions laws on the books. The sanctions still prohibit sales of technology to the Iranian government or any blacklisted people, U.S. officials said.

Among the groups blacklisted by Treasury on Thursday was the Committee to Determine Instances of Criminal Content.

The English transcript from Sherman`s interview was provided by the National Iranian American Council, a non-profit group that has long urged the U.S. government to ease restrictions on Iran that hurt ordinary citizens but do little to hinder the government`s actions.

In fact, restrictions on sales of technology benefit the Iranian government, which has an incentive to restrict the freedom of communication for anti-government activists, said Jamal Abdi, policy director at the council.
"Of all the sanctions, this was the most egregious example of sanctions that were clearly hurting ordinary people, clearly undermining civil society and the ability of human rights and pro-democracy defenders to organize," he said.

But the easing of restrictions should make it easier for Iranians to gain access to new technology and software, including security updates that could better protect them from Tehran`s cyber restrictions, Abdi said.