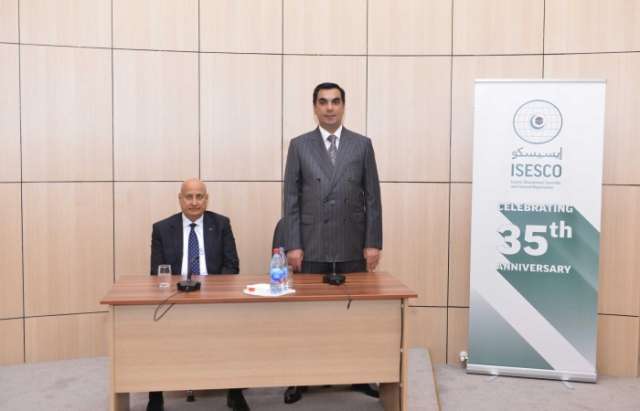 After the tour, the honourable guest met with BHOS management, professors, teachers, students and staff members. Opening the meeting, the Higher School’s Rector Elmar Gasimov provided detailed information about the BHOS new premises, which was built up to the highest international standards.

Director General of the Islamic Educational, Scientific and Cultural Organization (ISESCO) and Secretary General of Federation of the Universities of the Islamic World of the ISESCO Abdulaziz Othman Altwaijri visited the recently launched new campus of Baku Higher Oil School (BHOS).

During the visit, he was familiarized with the campus and its teaching and leisure facilities.

He said that the opening of the BHOS new campus took place on May 1, 2017, and the President of the Republic of Azerbaijan Ilham Aliyev attended the opening ceremony. At the new campus, the most modern technologies have been applied and all conditions are available to study and master knowledge.

As the rector informed, the Higher School was set up within SOCAR by a Decree of the President of the Azerbaijan Republic Ilham Aliyev dated by November 29, 2011.

“The main objective of BHOS establishment is training of high-qualified English speaking engineers in accordance with international educational standard who are able to participate in the large-scale projects implemented by SOCAR and in other international projects initiated for further development of the country,” he said.

Having said that strengthening BHOS international relations play a key role in ensuring high quality of education at the Higher School, Elmar Gasimov spoke about close and effective long-term cooperation, which BHOS developed with many companies and organizations including the Federation of the Universities of the Islamic World.

The Rector also emphasized that tolerance is a longstanding tradition in Azerbaijan, which can serve as an example of a society conducive to multiculturalism, inter-religious tolerance and mutual understanding between cultures and religions.

ISESCO Director General Dr. Abdulaziz Othman Altwaijri expressed his sincere gratitude to the BHOS Rector Elmar Gasimov for the invitation to visit the new campus of the Higher School.

He highly praised the Azerbaijani government’s attention to the issues of education and the State support provided to the development of this sphere. He emphasized that a university includes not only modern premises and advanced equipment; teaching-academic staff is the most valuable asset of any higher educational institution.

The Baku Higher Oil School can be justifiably proud of the best professors and scientists who deliver lectures and carry out research at BHOS, he said.

“The Rector Elmar Gasimov and I have reached an agreement to organize the next international conference of the Federation of the Universities of the Islamic World on issues related to oil and gas sector at the new campus at the Baku Higher Oil School,” Abdulaziz Othman Altwaijri informed.

ISESCO Director General also told that the Higher School could attract students from many Islamic countries and assured the BHOS management that he would provide all necessary support to implement this initiative.