`Armenia’s occupation policy - an attack not only on Azerbaijan’s religious, cultural assets, but on Islam’s historical, cultural legacy` 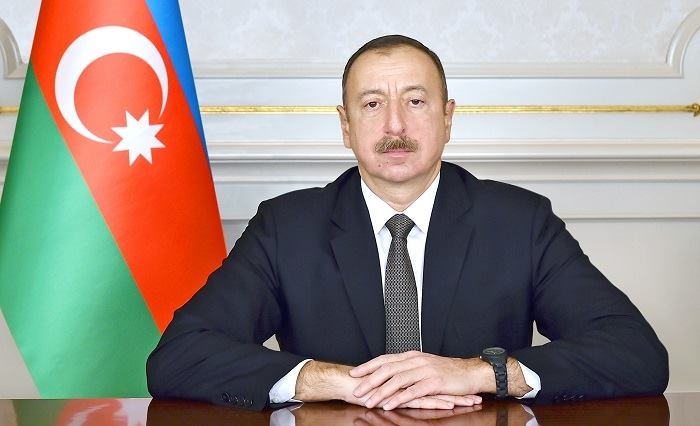 Today, the Islamic world faces serious challenges and many problems awaiting their solution, Azerbaijan’s President Ilham Aliyev said in an article titled “Strengthening of Islamic Solidarity is a Challenge of Time,” which was published by OIC Journal, the official publication of the Organization of Islamic Conference.

With its ancient history, rich cultural legacy, huge natural and human resources, the Islamic world has played a crucial role in the establishment and development of the modern world order and international relations system, reads Azerbaijani President Ilham Aliyev’s article headlined “The strengthening of Islamic solidarity is a challenge of time.”

The article was published in the OIC Journal, issued by the Organization of Islamic Cooperation.

“Islam always encouraged peace, tolerance, humane ideals and made an outstanding contribution to the world civilization,” the article said. “Being a crucial and integral part of the Muslim world, Azerbaijan is renowned as one of the important places where the Islamic cultural legacy was established and preserved. Islam, which became widespread in the territory of Azerbaijan in the 7th-8th centuries, enriched the spiritual life of our people, later growing into one of the main factors defining their lifestyle and co-existence norms.”

“Ashabi-Kahf pilgrimage site, the most ancient mosque in the Caucasus - Shamakhi mosque built in 743 - Bibiheybat mosque and pilgrimage complex, Ganja “Imamzade” complex and many other sites can be considered as Azerbaijan`s outstanding contribution to the system of Islamic religious and cultural values,” reads the article. “The people of Azerbaijan have always had great respect for their history, spiritual values; and even the flag - a state symbol - of Azerbaijan Democratic Republic, which was founded in 1918, reflected their Islamic identity. Despite persecutions under the USSR, the people of Azerbaijan managed to preserve some of their religious sites and mosques, and remained committed to their religious values.”

“Restoration of state independence in the early 1990s marked the establishment of the freedom of religion and conscience in Azerbaijan, and significant work was done in the country to restore religious monuments, mosques and temples,” Ilham Aliyev said in his article. “If there were only 17 mosques in Azerbaijan during the Soviet period, their number reached 2,166 at the beginning of 2017. 306 mosques are currently under state protection as historic monuments.”

Bibiheybat mosque and pilgrimage complex, Tazapir mosque, Icharishahar Juma and Holy Muhammad mosques, Ajdarbay mosque, Shamakhi Juma mosque, Ganja “Imamzade” complex and tens of other religious monuments and mosques were completely repaired and renovated by the state, and opened doors to believers, according to the article.

“It should be noted that Azerbaijan has made great strides in all areas in the 25 years of its independence,” the article said. “The implementation of transnational energy projects since the 1990s created wide opportunities for us to develop our national economy and make the non-oil sector one of the leading segments of economy. Over the past 10 years all the infrastructure in the country has been modernized, energy security has been fully provided, food security has been largely ensured, the level of poverty and unemployment has decreased 10 times to reach five per cent.”

“With its modern transport and transit infrastructure, Azerbaijan is playing an active role in the establishment of the East-West and North-South international transport corridors, and is already becoming a global transportation hub,” Azerbaijani president said in his article. “The Southern Gas Corridor, which is called the project of the 21st century and which is being successfully implemented, will allow Azerbaijan to transport its gas to the world market in large volumes.”

“Building and developing relations with the Islamic world have been among the key priorities of Azerbaijan`s foreign policy in the years of independence,” reads the article. “Azerbaijan opened its first diplomatic missions in Muslim countries, and in a short period of time our state became an active member of the organizations, which unite the Muslim world, such as the Organization of Islamic Cooperation (OIC) and ISESCO. Azerbaijan initiated the establishment of new organizations that contribute to the strengthening of Islamic solidarity, including OIC Youth Forum, OIC Labor Center and the Journalist Association of OIC Member States.”

“Our country also created bilateral and multilateral cooperation formats, which serve the expansion of relations with the Muslim world, and numerous projects implemented within the framework of these platforms contribute to the strengthening of mutual ties,” said the article. “Elevation of our economic cooperation with Islamic countries to the level of our political relations is one of our primary goals. We attach special importance to the development of mutually fruitful cooperation with the Islamic world in these and all other areas.”

“Mutual support within the framework of international organizations, particularly the United Nations, reinforces our standing,” Ilham Aliyev said in the article. “I have to note that Islamic countries played a vital role in Azerbaijan`s election as a member of the UN Security Council in 2012. We consider this as a manifestation of the high level of our political relations, mutual support and solidarity with Islamic countries.”

“During its membership of the UN Security Council, Azerbaijan put forward and implemented a number of proposals serving the interests of the Islamic world,” Azerbaijani president said in the article. “For example, along with an initiative to organize a high-level international conference on the fight against terrorism, Azerbaijan also ensured the organization of a high-level meeting on the expansion of cooperation between the UN and the Organization of Islamic Cooperation.”

“We have to admit that today the Islamic world is facing serious challenges and numerous problems, which await solution,” reads the article. “The Armenia-Azerbaijan Nagorno-Karabakh conflict, Palestine and Kashmir problems, conflicts in the Middle East states, refugee crisis, etc. can be singled out among these problems. It is a well-known fact over the past 200 years the Armenians have committed bloody crimes in order to occupy Azerbaijan`s historic lands and build their own state in those territories.”

“Today`s state of Armenia was established in the ancient Azerbaijani lands,” said the article. “Continuing its policy of aggression, Armenia occupied 20 percent of the Azerbaijani territories at the beginning of the 1990s, and as a result more than one million Azerbaijanis became refugees and IDPs, our fellow countrymen were subjected to ethnic cleansing and genocide. In 1993, the UN Security Council adopted four resolutions condemning the use of force against Azerbaijan and the occupation of its territories, and recognizing the country`s territorial integrity, sovereignty and inviolability of its internationally-recognized borders.”

“Similar documents were adopted by the OSCE, Council of Europe, European Union, Non-Alignment Movement, and other influential international organizations,” the article said. “OIC adopted numerous resolutions supporting Azerbaijan`s territorial integrity and just position, and urging recognition of the Khojaly genocide and practical measures against Armenia`s policy of occupation. The issue has repeatedly been discussed at the OIC Council of Ministers of Foreign Affairs, and a Contact Group on the aggression of Armenia against Azerbaijan was established within OIC and held its first meeting in September, 2016.”

The UN and OIC resolutions, which clearly recognize Armenia as an aggressor, must be the main message to all Muslim countries that want to develop relations with the invader because Armenia`s policy of occupation is an attack not only on Azerbaijan`s religious and cultural assets, but on historic and cultural legacy of Islam in general, according to the article.

“Hundreds of Islamic culture monuments, mosques, temples, cemeteries, etc. were destroyed in the territories occupied by Armenia, and all this was confirmed by the OSCE fact-finding missions,” Ilham Aliyev said in the article. “I also have to note that Pakistan and Saudi Arabia refused to officially recognize Armenia because of its occupation of the Azerbaijani territories, while Turkey has not established any relations with this country. Currently five Muslim states have officially recognized Khojaly genocide. We consider all this as an example of brotherly relationship and real support.”

“Azerbaijan spares no efforts to contribute to resolution of the ongoing conflicts in the Islamic world, unambiguously stands for international law during discussions on fair resolution of problems and always remains committed to its principled position,” the article said. “In 2013, Azerbaijan hosted "The donor's conference to finance the strategic plan for the development of the city of Al-Quds", and "The establishment of an Islamic Financial Safety Net in Support of the State of Palestine" conference, and made significant donations to this cause.”

Azerbaijan, which is strongly committed to religious and cultural values of Islam, is also renowned as one of the world`s centers of multiculturalism, according to the article.

“We consider the provision of cultural diversity, an atmosphere of ethnic and religious tolerance in Azerbaijan as a great achievement,” reads the article. “There has never been religious and ethnic discrimination in our country, and representatives of all religions have lived here in peace and mutual understanding. This is our lifestyle and the best way to confidently move forward.”

“We’re openly speaking against Islamophobia and working consistently to promote Islamic values around the world,” Azerbaijani president said in his article. “Azerbaijan actively contributed to the organization of the Department of Islamic Arts in famous Louvre museum in France, and was the first Muslim country to demonstrate its exhibition in the Vatican. In 2009, Baku was declared the capital of Islamic culture with the support of ISESCO. In 2018, Nakhchivan, another ancient Azerbaijani city, was awarded this honorary title.”

“Azerbaijan is taking practical steps to strengthen intercultural dialogue,” said the article. “Baku, which annually hosts the Intercultural Dialogue Forum, International Humanitarian Forum and other major international events, is already called a "humanitarian Davos". In 2016, we witnessed how aggressively the migrants from the Middle East and African countries seeking refuge in Europe were met, and also saw a clear manifestation of Islamophobic trends.”

In such a situation, by declaring 2016 "The Year of Multiculturalism", Azerbaijan once again showed the world that representatives of different religions, nationalities, ethnic groups can live together comfortably and with dignity in the same country, under the same sky, according to the article.

“We not only perfectly regulate inter-ethnic, inter-faith relations within the country, but offer the world a progressive model of tolerance and multiculturalism,” the article said. “As one of the few countries, which are members of both the Council of Europe and OIC, Azerbaijan is making a practical contribution to the strengthening of dialogue among civilizations. As we know Baku hosted a meeting of culture ministers of the member states of the Council of Europe in 2008, and OIC representatives were also invited to that event.”

“Then ministers of the Council of Europe member states were invited to a gathering of ministers of the OIC member states, which was held in Baku in 2009,” reads the article. “I think that this was a very important event on a global scale, and worthily went down in history as “Baku process” of dialogue of civilizations.”

In 2015, Azerbaijan hosted the First European Games, and this important sporting event was held at the level of Summer Olympic Games, according to the article.

“This year Baku will host the 4th Islamic Solidarity Games,” Ilham Aliyev said in the article. “It is symbolic that in a short space of time the European Games are followed by the Islamic Solidarity Games, and this shows that Azerbaijan has become the center of dialogue of civilizations and religions, and an economic and cultural bridge. We use this unique position to establish peace, multiculturalism and tolerance all around the world.”