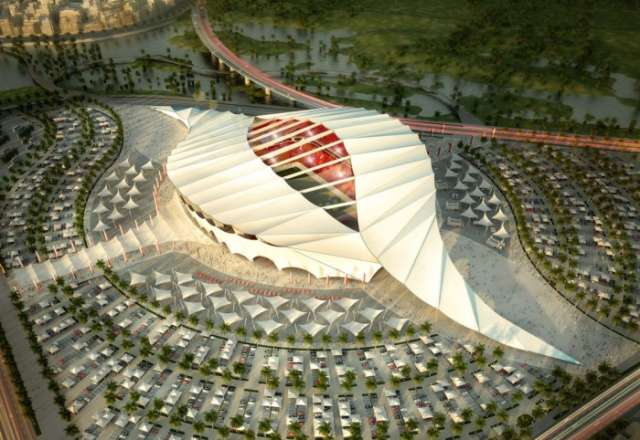 In 2010, the president of fifa, Sepp Blatter, announced that his organization had selected Qatar, a tiny, wealthy emirate on the Persian Gulf with a little more than two million inhabitants, to host the 2022 World Cup.
It was a strange choice for one of the world’s largest sporting events: summer temperatures in Qatar regularly exceed a hundred and ten degrees, and the country would have to build nine stadiums from scratch. But the fifa evaluation group said it was impressed by Qatar’s master plan, which had been developed by the Frankfurt-based architecture and planning firm Speer and Partners and overseen by the firm’s founder, Albert Speer, Jr.

Speer, Jr., an eighty-two-year-old with a perennially serious expression and a fondness for energetic hand motions, is one of Germany’s best-known urban planners. He has risen to the top of the German planning world over the past fifty years, thanks to his reputation for sustainability and “human scale” architecture, and despite being the son of Hitler’s favorite architect. Speer, Jr.,’s typically thoughtful approach was on display in the fifa bid, which featured a small footprint, stringent environmental measures, and a concept for “modular” stadiums that could be shipped to developing countries at the conclusion of the World Cup. After the ceremony, Sheikh Mohammed bin Hamad bin Khalifa al-Thani, the ruler of Qatar, called Speer, Jr.,’s office to say, “I love my Germans!”

But, since the decision was announced, Qatar’s World Cup bid has taken a darker turn. The BBC reported, in 2015, that more than twelve hundred migrant Indian and Nepali workers may have died while working on construction in the country between 2011 and 2013, including on the World Cup site. A 2015 investigation into fifa raised concerns about corruption in Qatar’s bid, and human-rights groups have continued to report numerous workers’-rights violations in Qatar, including squalid living conditions and the confiscation of workers’ passports.

For Speer, Jr., the controversy has invited the one thing that he has worked his entire career to avoid: comparisons to his father. To his irritation, Speer, Sr., has long cast a shadow over his career. Until recently, he had struggled to get commissions in Berlin because of his father’s infamous Nazi-era projects in the city. “I understand that people don’t want the world to hear that ‘Albert Speer’ is building in Berlin,” he told Der Spiegel, in 1999. When officials announced in late March that Speer, Jr.,’s firm was involved in planning a new stadium for Berlin’s Hertha B.S.C. football team, a local tabloid pointed out that his father had worked on the team’s current stadium, which was built for Hitler’s 1936 Olympics.

In interviews, Speer, Jr., who wears oversized wire-rimmed glasses and has an elegant swath of white hair, has always been friendly but reserved. He took part in a German TV documentary about his father in 2005, but, after Der Spiegel published a lengthy reported article in the wake of the Qatar scandal, he stopped speaking to the press. He has always made it clear that he doesn’t enjoy talking about his family. As he told the Munich newspaper Süddeutsche Zeitung, in 2010, “I have spent my entire life trying to differentiate myself from my father, to distance myself,” and “journalists have a hard time respecting that.”

Nevertheless, he has occasionally spoken about his childhood. When he was young, his family lived near Hitler’s Bavarian mountain retreat, in housing for the Nazi élite, and he had to walk an hour through the mountains each day to go to school. “I hated school,” he told the newspaper, because he didn’t like being told what to do. His father was a strict disciplinarian who, according to the historian Martin Kitchen’s recent biography, would terrorize some of his children by driving at breakneck speed along winding mountain roads. Speer, Jr., came to view his family’s visits to Hitler’s vacation home as a respite. “To be called to visit Hitler was almost a happy occasion. I was allowed to play with the dogs. I got sweets,” he told the newspaper. To him, as a child, the Führer was like a “nice uncle.”

Speer, Sr., was charged with carrying out two of the most notorious architectural projects of the Third Reich: the construction of Hitler’s new Berlin Reich Chancellery—which was to be the physical embodiment of the Nazi ethos, an oversized colossus of marble and fascist kitsch—and the reimagining of Berlin as the new Nazi capital of Germania. Hitler’s plans for Germania called for huge sections of the city to be bulldozed and replaced with two large boulevards bordered by enormous buildings. The north-south axis was to run from a gigantic train station, in the south, through an enormous victory arch and culminate at a three-hundred-and-twenty-metre-high dome able to accommodate a hundred and eighty thousand people.

At the Nuremberg trials, Speer, Sr., professed his ignorance of the Holocaust and his desire to murder Hitler in the latter stages of the war—which earned him the nickname “the Good Nazi”—but his reputation has recently undergone a more critical reëxamination. In 2007, letters between Speer, Sr., and the widow of a Belgian resistance fighter were uncovered in which the former Nazi wrote that he knew about the Holocaust as it happened. In his recent biography, Kitchen also implicated Speer, Sr., in the expulsion of thousands of Jews from their homes in Berlin and in the widespread use of slave labor to complete his projects. He describes him as a “hollow man . . . totally lacking in moral vision.”

At the end of the trial, he was sentenced to twenty years in prison for war crimes and crimes against humanity. “Suddenly I had no more father,” Speer, Jr., told Süddeutsche Zeitung. Stressed by the chaos engulfing Germany and his father’s guilt, Speer, Jr., developed a severe stutter and, incapacitated at school, began training as a carpenter. Ultimately, he decided to sign up for architecture school at Munich’s Technical University, in 1955, partly because it wouldn’t require him to talk much. “Back then, it was simply a path that opened itself up. I could draw well, I could express myself, I had ideas,” he said in the TV documentary. “The father played hardly any role, but what has always fascinated me is the ability to create living conditions.”

In 1964, he applied for his first major competition, to redevelop a section of the city of Ludwigshafen that had been flattened by Allied bombers. His plan—to move highways outside of the city center and thus preserve the city’s downtown structure—was awarded second place, and set a moral template for the rest of his career. Four years later, he received his first foreign commission—to come up with a master plan for several cities in western Libya—by pretending that his Frankfurt loft was an office and asking his friends to act as office workers when the delegation arrived for a meeting. “We dressed all of my friends in white smocks and had them bent over imaginary plans,” he told Süddeutsche Zeitung.

Since then, Speer, Jr., has made his name as a proponent of the “intelligent” city—a flexible concept based on socially progressive values—and has become a vocal opponent of “statement” architecture. Although Speer, Jr., has defended his father’s work—he told Süddeutsche Zeitung that Speer, Sr., “was a good architect, much more modern than people think today”—it’s hard not to see his own work as a conscious corrective to the crimes of his father. His modest approach stands in complete opposition to Hitler’s call for “monuments” to dominate German cityscapes. “I think, because of his father, and because he was a modern urban planner, he believed that urban planning should come from the people, and not from an ideology,” Gerhard Matzig, the architecture critic at Süddeutsche Zeitung, said.

After the work in Libya, Speer and Partners received commissions to design several master plans for Frankfurt and, in the process, shape the city’s skyline. The firm also completed projects in Asia and North Africa and planned several big events, including Expo 2000, in Hanover. Matzig argued that the firm’s urban-renewal proposal for Munich’s Arnulfpark area—a former train yard that was turned into a mixed-use neighborhood—is most emblematic of his approach. While a rival planning firm proposed covering the site with high-rises and a variation on the triumphal arch, Speer and Partners’ proposal prioritized smaller-scale mixed-use development.

By most accounts, Speer, Sr., and Speer, Jr., had a complicated relationship. According to Kitchen’s biography, Speer, Sr., told a guard during his imprisonment that he dreaded visits from his children because “he found that he had nothing left to say” once he had finished asking them about their mother and school. When he became an adult, Speer, Jr., consciously changed his signature so that it would be different from his father’s. After Speer, Sr., was released from prison, Speer, Jr., showed him one of the first buildings he had designed: a small wooden vacation home that he had built himself on the edge of a lake near Munich. His father told him that it was a “waste of money.” Despite all of this, Speer, Jr., has refused to condemn his father outright. “Can you despise your own father?” he told Süddeutsche Zeitung. “No.”

But his sense of moral rectitude has not kept him from working with authoritarian governments. Speer, Jr.,’s guideline has been that “Germans should be able to work in countries with a German embassy.” His firm designed a cube-shaped courthouse in Riyadh, Saudi Arabia—a country that executes homosexuals and adulterers—and one of his favorite projects is nineteen-seventies master plan for the city’s diplomatic district. He also designed a “German-style” residential quarter outside Shanghai and a boulevard in Baku, Azerbaijan.

“I barely know any successful architects who don’t work for authoritarian regimes,” Matzig said. “Ultimately, the completion of projects can lead to a rapprochement.” Speer, Jr., has argued that his primary goal has been to improve the lives of people living in cities, regardless of the political system. “This has very little to do with politics,” he told Der Spiegel in 2015. “We are doing something for the people when we develop a master plan for four to six million residents in Alexandria.” The firm’s 2000 master plan for Abuja, Nigeria, for example, used Speer’s human-scale approach to solve the rapidly growing city’s congestion problems, establishing satellite downtown areas with their own markets and hospitals. He has also described his Shanghai International Automotive City as a form of “knowledge transfer” for sustainable development.

If Speer, Sr.,’s work was a reflection of the Third Reich’s values, Speer, Jr.,’s is a manifestation of Germany’s postwar identity: a country that has tried to atone for its past by becoming an international advocate for human rights and environmental sustainability, a country that is attempting to make up for its mistakes by becoming more thoughtful and humane (albeit while often advancing its own financial interests).

In Speer, Jr.,’s final interview to Der Spiegel in 2015, he said he was glad that the Qatar scandal had brought to light the country’s human-rights problems. “It is fantastic that, with the help of media reports . . . people are taking a closer look,” he said. Since the workers’ deaths have come to light, the country has promised to change its labor laws, and the U.N.’s International Labor Organization has given the country until November to institute the changes, at which point it will decide whether to initiate a commission to probe abuses. “We really do feel like we are doing something positive for the country and the people there,” Speer, Jr., said. “That is our benchmark.”