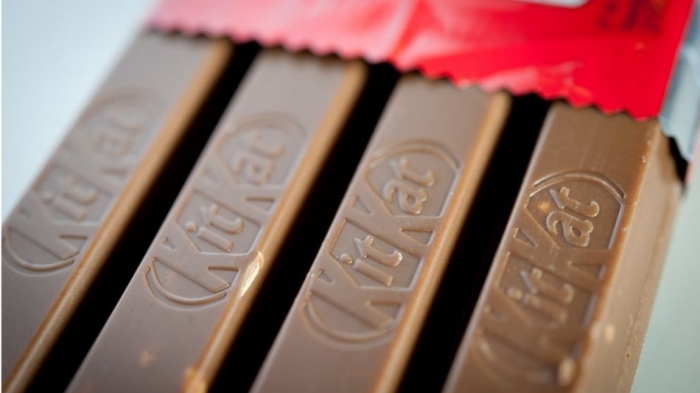 Court of Appeal judges in London have stuck two fingers up to Nestle's attempts to trademark the shape of its famous four-fingered KitKat bar.

The ruling is the latest twist in a decade-long UK chocolate wars saga between Nestle and Cadbury.

The Dairy Milk maker failed in its own attempt to trademark the shade of purple it uses after Nestle complained.

But on Wednesday, it was the Cadbury bosses celebrating the latest attempt to foil KitKat's plans.

Nestle claimed that the shape of the bar was so unique, it should be protected by law.

But time after time, judges have thrown out the attempt.

Its case was not helped by the existence of a similar Norwegian bar, called Kvikk Lunsj, which means "quick lunch" and has been around since 1937.

A spokesperson for Nestle said the company was weighing up its options.

"Nestle is disappointed by the Court of Appeal judgment and is considering next steps.

"KitKat is much loved around the world and its four-finger shape is well known by consumers.

"Nestlé's four-finger shape has been granted trademark registration in many countries of the world, for instance Germany, France, Australia, South Africa and Canada, further protecting it from imitations."

Cadbury's owner, Mondelez, which fought the attempt, said: "We are pleased with the Court of Appeal's decision today and welcome their conclusion.

"As we have previously stated, we do not believe the shape of the KitKat bar should be protected as a trademark in the UK."

The ruling could lead to copycat versions of the bars hitting shelves, a practice some discounter supermarkets have popularised.

Aldi and Lidl have both been accused of selling own-brand versions that a remarkably similar to famous brands.

KitKats were first snapped up by the public in 1935 by Rowntree, when it was called the Chocolate Crisp.

In September 2015, Nestle failed to persuade European judges of its arguments.

The European Court of Justice said that the company had to demonstrate the public relied on the shape alone to identify the snack.

They concluded this was difficult to prove if goods also showed a brand name, such as KitKat.

Nestle has experience of trying to register difficult trade marks.

It took more than 40 years for it to register the slogan "Have a Break" as a trade mark, finally succeeding in 2006.

Nestle first tried to trademark the shape of the four-fingered chocolate bar in 2010, but its attempts were opposed by Cadbury.

The two have also battled over other trademarks. In 2013, Nestle blocked Cadbury's attempts to register the shade of purple used in the packaging of Dairy Milk.

Nestle has not sought to trademark the two-fingered bar.

Shapes can be trademarked for certain distinctive products - such as the iconic London black taxi - but others can struggle.