Donald Trump should worry about another 9/11 rather than making claims about Iran, says Tehran 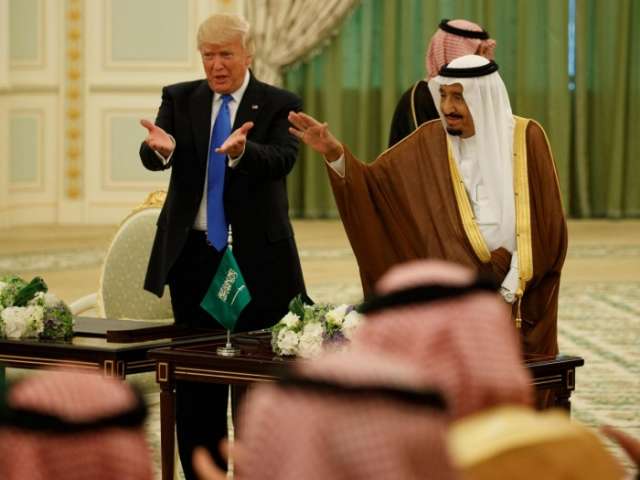 Donald Trump should spend his time usefully in Riyadh by discussing how to avoid his Saudi hosts carrying out another 9/11 atrocity in the US instead of making baseless claims of terrorism against other countries, Iran’s foreign minister has advised, AzVision.az reports citing the Independent.

In his speech to Arab heads of state in the Saudi capital, Mr Trump repeatedly attacked Iran, claiming it “funds arms, trains militias that spread destruction and chaos” and pointing to Iran’s support for Syria’s Bashar al-Assad as he committed “unspeakable crimes”.

The US President added that people in Iran had “endured hardship and despair under their leaders’ reckless pursuit of conflict and terror”. Earlier, King Salman of Saudi Arabia also railed against Iran calling the country “the spearhead of terrorism”.

Most of the 19 terrorists who murdered nearly 3,000 people in New York in 2001 were Saudi citizens and there have repeated accusations that members of the Saudi hierarchy were complicit in the attack.

Iran’s foreign secretary Javad Zarif pointed out Mr Trump had himself previously suggested the Saudis were behind the 9/11 attacks.

Mr Zarif said: “He must enter into dialogue with them [the Saudis] about ways to prevent terrorists from continuing to fuel the fire in the region and repeating the likes of the September 11 incident by their sponsors in Western countries.

"You will find out who really knocked down the World Trade Centre because they have papers out there that are very secret. You will find it’s the Saudis, you will find that is the case.”

The baleful shadow of Mr Trump loomed large in the run-up to Iran’s elections last week in which President Hassan Rouhani was returned to power by a landslide.

While campaigning ahead of the US election, Mr Trump said the 2015 nuclear agreement Tehran signed with international powers was the “the worst deal ever” and that he was determined to “dismantle this disastrous mistake”.

Since then the Trump administration, despite grudgingly admitting that Iran was complying with its obligations under the agreement, has made repeated threats against Tehran. This, it was feared, would play into the hands of the hardliners in Iran, who attacked Mr Rouhani for signing the nuclear deal.

After Mr Rouhani’s sweeping victory over his conservative rival Ebrahim Raisi, Iranian officials have been more sanguine about Mr Trump’s coming speeches in Saudi Arabia and his next stop, Israel, pointing out the US President is bound to play to the gallery when hosted by two countries which portray Iran as the arch enemy.

However, there is now apprehension that the US administration may impose new unilateral sanctions on Iran following entreaties from the Saudis, who are leading a series of Sunni proxy wars against Shia Iran, such as in Yemen.

Senior figures in Tehran claim there are major economic factors at play that are encouraging Washington to play up the Iranian “threat”.

Speaking before Mr Trump, the US Secretary of State, Rex Tillerson, accused Iran of running a “network of terrorism” and demanded that it start “dismantling the manning and the logistics and everything that they provide to these destablising forces that exist in the region”.

Mr Trump has signed a deal to sell $110bn worth of weapons to Saudi Arabia with another $350bn to follow over the next decade. The kingdom is already the biggest client for US military exports.

The US President himself constantly brought up the issue of arms sales while meeting Arab leaders in Riyadh. He promised Qatar’s Emir, Sheikh Tamim bin Hamad Al-Thani, that the two men would discuss “lots of beautiful military equipment because nobody makes it like the United States”. And Mr Trump noted, in a meeting with Kuwait’s Emir, Sabah al-Ahmad al-Sabah, that his country were good customers for US arms.

However, Mohammad Hashemi Rafsanjani – a leading member of Iranian parliament’s Expediency Council and brother of the late former president Ali Akbar Hashemi Rafsanjani – claimed the arms deals may backfire on the Saudis with the same weapons turned against the royal family in the future.

Mr Rafsanjani drew a parallel with Iran's former shah whose regime was toppled by the 1979 revolution. He said: “We have seen it all before. The Saudis are spending billions on arms which they don’t have the capacity to absorb. At the same time they are facing rebellion at home they are trying to hide and a costly war in Yemen.

“The Shah, too, spent billions of dollars buying arms from America, he too had capacity problems. We had 65,000 Americans in Iran, most of them in the armed forces. But then came the revolution and the weapons were used against him and his regime.

“We watch what is going on in Saudi Arabia and I think the fate of the Saudi royal family will be the same as that of [the Shah’s dynasty] the Pahlavis. There is less and less space in the world for absolute monarchies like the Saudis”.