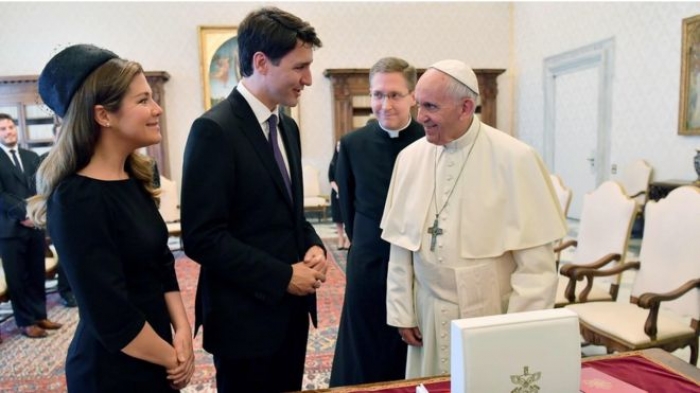 Canadian Prime Minister Justin Trudeau has asked Pope Francis to apologise for the role of the Catholic Church in a Canadian school system where indigenous children were abused for decades.
The PM met the pontiff at the Vatican on Monday as part of his trip to Italy for the G7 summit.

The residential schools were set up from the 1880s to take children from their families and assimilate them into mainstream Canadian society.

"I told him how important it is for Canadians to move forward on real reconciliation with the indigenous peoples and I highlighted how he could help by issuing an apology," Mr Trudeau told reporters after meeting the pope.

He said he had invited the pontiff to make the apology in Canada.

Some 150,000 aboriginal children were forcibly removed from their families, and sent to live in church-run boarding schools where they were forbidden to speak their language or practise their own culture.

Canada's Truth and Reconciliation Commission has called for a papal apology, as part of the healing process for survivors.

Although the Vatican has not commented on Mr Trudeau's request, it confirmed the talk was "cordial" and lasted about 36 minutes. It said the conversation "focused on the themes of integration and reconciliation, as well as religious freedom and current ethical issues" but did not mention an apology directly.

The Truth and Reconciliation Commission, which has been tasked with collecting the stories of survivors and recommending a way forward for the country to heal, has called the residential school system "cultural genocide".

In its report, the commission recommended the Catholic Church issue a formal apology for its part in the residential school system.

Similar apologies have been issued by Anglican, Presbyterian and United Churches, who along with the Catholic Church helped run these schools as joint ventures with the Canadian government.

In 2008, former prime minister Stephen Harper issued an apology on behalf of Canadians, calling it "a sad chapter in our history".

A year later, Pope Benedict expressed "his sorrow at the anguish caused by the deplorable conduct of some members of the Church" to a delegation from the Assembly of First Nations, a national advocacy organization, who went to the Vatican.

In 2015, Mr Harper met Pope Francis and called attention to the commission's findings.

Mr Trudeau said he also spoke with the Pope about a subject dear to both of them: the importance of stopping climate change.

"We talked about how important it is to highlight the scientific basis of protecting our planet and the moral and ethical obligations to lead, to build a better future for all people on this earth," Mr Trudeau said.

During the visit to the Vatican, Mr Trudeau was joined by his wife Sophie Grégoire-Trudeau. While in Italy, he also visited the Roma football club and will meet Italy's prime minister and president.