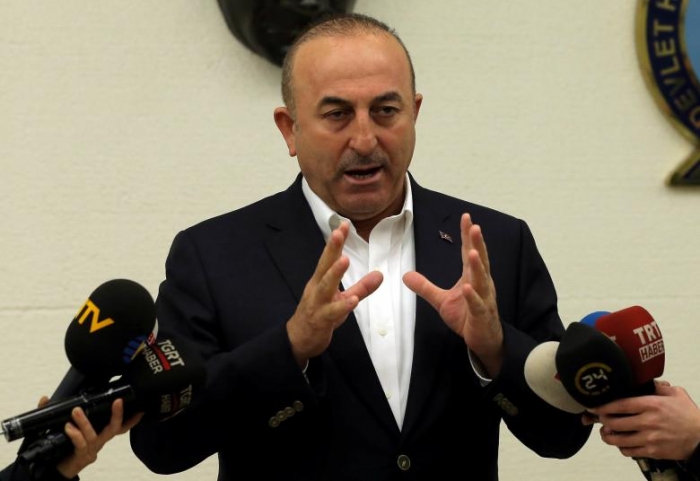 Turkey sent its foreign minister to Qatar on Wednesday as part of a drive to repair Qatar's rift with fellow Gulf Arab states.

"We do not want any differences between our brothers in the GCC (Gulf Cooperation Council) countries, and it is not enough to say that there is a problem without trying to resolve it," Turkish Foreign Minister Mevlut Cavusoglu told the Qatari news agency QNA on arrival.

"Turkey seeks to resolve the unprecedented crisis between brotherly countries in the GCC."

President Tayyip Erdogan has cultivated close ties to Qatar, setting up a military base there, while preserving relations with Saudi Arabia.

Cavusoglu was due to meet Qatar's Emir Sheikh Tamim bin Hamad al-Thani, and Qatar's state run pan-Arab news channel Al Jazeera said his next stop would be Kuwait, which has also been seeking to mediate in the dispute.

Turkey and Qatar have both provided support for the Muslim Brotherhood in Egypt - a broad movement whose Islamist goals are anathema not only to Egypt's ex-military president, Abdul Fattah al-Sisi, but also to the Gulf's dynastic rulers.

Conservative Gulf neighbors have long viewed Qatar's foreign policy with suspicion, especially its refusal to shun Shi'ite Iran, and resented Al Jazeera for its readiness to air unwelcome or dissenting views from across the region.

The Gulf Arab states have not made public their demands of Qatar, but an Al Jazeera journalist shared on Twitter a list that includes Qatar severing diplomatic ties with Iran and expelling members of the Palestinian Islamist Hamas group and the Muslim Brotherhood who live in Doha.

Egyptian Foreign Minister Sameh Shoukry told reporters in Cairo that the conditions set for Qatar were necessary for the national security of Egypt, Saudi Arabia, Bahrain and the UAE, the Egyptian state news agency MENA reported.

"This move will bring concrete, quick and decisive results," he said.

Egyptian President Abdel Fattah al-Sisi, trying to ease fears, told reporters in Berlin he does not expect a military conflict.

French President Emmanuel Macron, visiting Morocco, called for de-escalation of tensions in the Gulf crisis. He said he would hold talks with leaders of Saudi Arabia, UAE and Qatar.

Qatar has a population of 2.7 million people and vast gas wealth. The sanctions have disrupted imports of food and other materials and travel, and they have caused some foreign banks to scale back business.

Before the diplomatic and commercial embargo, Qatar imported 80 percent of its food from bigger Gulf Arab neighbors. It has been talking to Iran and Turkey to obtain food and water.

Saudi Foreign Minister Adel al-Jubeir, speaking after talks in Washington with U.S. Secretary of State Rex Tillerson on Tuesday, said the sanctions did not amount to a blockade since Qatar's airports and ports remained open, and offered to send food and medical supplies to Qatar if needed.

Qatar said the Saudi offer confirmed that the closure of transport links "is a siege, not a boycott."At Qatar's Hamad port on Wednesday, workers were busy unloading containers of food and building materials, while another ship carrying livestock, including chickens and sheep from Australia, was at the quayside.

"There is a service from India ... which used to come via Jebel Ali port (in the United Arab Emirates) but is now redirected," said a port official who declined to be named.

"The first vessel on that service is to arrive Friday and will run once a week."

The effects of the dispute are rippling out beyond the region.

Qatar said it had withdrawn troops from the frontier between the east African states of Djibouti and Eritrea, where it has been acting as mediator in a border dispute. It gave no reason, but Djibouti had earlier downgraded its diplomatic ties with Qatar.