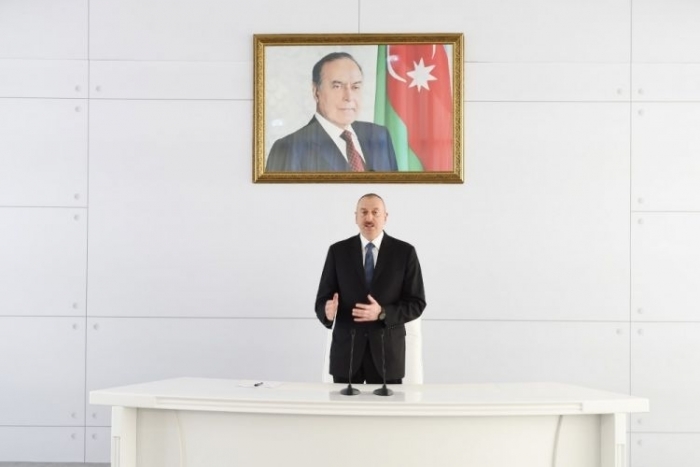 Azerbaijan’s stance on the settlement of the Armenia-Azerbaijan Nagorno-Karabakh conflict is clear, President Ilham Aliyev said on Friday.

Azerbaijan repeatedly stated that the Nagorno-Karabakh conflict should be resolved within its territorial integrity on the basis of the norms and principles of international law, and there is no other way, said President Aliyev addressing the opening ceremony of a plant for the production of components for 40x46 mm MSGL 40-type grenade launchers in country’s Shirvan city, AzVision.az reported.

“Nagorno-Karabakh is our historical land. Our people have lived in these lands for centuries, and all the toponyms and all historical monuments reflect the history of Azerbaijan,” he said.

President Aliyev pointed out that the international community recognized Nagorno-Karabakh as an integral part of Azerbaijan.

He reminded that all leading international organizations have adopted numerous decisions and resolutions that demand an immediate and unconditional withdrawal of Armenian troops from the occupied Azerbaijani territories.

“However, Armenia keeps ignoring it and, unfortunately, no serious measures are taken against this country. International sanctions should have been imposed on Armenia long ago, because this country is holding another country's territory under occupation in the 21st century, committing a massacre against another people and destroying all historical monuments. The view of ruined Jojug Marjanli is clear proof of it, as in the case of all our occupied lands,” the president added.

He stressed that international law, as historical justice, gives strength to Azerbaijan’s position.

The Azerbaijani president also spoke about the so-called “referendum” recently held in Nagorno-Karabakh.

“The so-called “referendum” in Nagorno-Karabakh was yet another shame on separatists as it was not recognized by any international organizations, neighboring countries, the EU and the OSCE Minsk Group co-chairing countries. That is, unrecognizing this so-called “referendum”, these countries and international organizations once again affirm that Nagorno-Karabakh is an Azerbaijani land,” he said.

He noted that the international community does not recognize and will never recognize the separatist khunta regime in Nagorno-Karabakh.

President Aliyev stressed that Azerbaijan’s economic power is many times greater than that of Armenia and all these factors strengthen the country’s position.

“Of course, the Azerbaijani state needs to further strengthen its principled position. We live in a state of war. Our people will never accept this situation. We will never allow a second Armenian state to be illegally established in our historical lands. We will restore our territorial integrity. Recent developments and the strengthening position of our country increase our ability to achieve this goal,” he said.

The president added: “Of course, to achieve our goal, we must be even stronger. Unfortunately, today the power factor plays a leading role in the world. Of course, international law is also of great importance, because it creates a legal basis for a conflict. We observe that international law is violated in many parts of the world, people are interpreting it as they wish and changing the real situation through power factor. This is not our choice, but we live in a real world. We should be more powerful to achieve our goal and work is being done in this direction.”