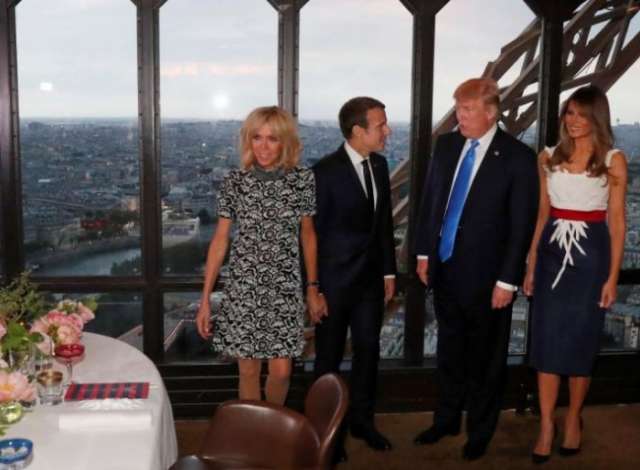 U.S. President Donald Trump praised French first lady Brigitte Macron for being in "such good shape" on Thursday during his state visit to France, according to a video on the French government's Facebook page.

Trump, 71, who has come under fire for his comments about women's appearances, and his wife, Melania, 47, met with French President Emmanuel Macron and Brigitte, 64, at Hotel des Invalides, where Napoleon Bonaparte and other French war heroes are buried.

After a tour, Trump turned to the French first lady, gestured toward her and said: "You're in such good shape."

After repeating the comment to the president, Trump turned back to Brigitte Macron and said: "Beautiful." Her response was unclear.

Social media immediately reacted to the video with many users denouncing Trump's comments as sexist.

Jen Siebel Newsom, a documentary maker and actress, (@JenSiebelNewsom) said on Twitter: "Mr. Trump - Women do not want to hear unsolicited remarks on what you think of their bodies. Its gross, and deeply inappropriate."

The White House declined to comment on the exchange. The couples dined together at a restaurant in the Eiffel Tower on Thursday night.

Brigitte Macron was once the 39-year-old French president's high school teacher. He is the country's youngest leader since Napoleon two centuries ago.

Trump has been denounced for comments deemed sexist, including criticizing the looks of former presidential candidates Hillary Clinton and Carly Fiorina, comedian Rosie O'Donnell, media figure Ariana Huffington and models Kim Kardashian and Heidi Klum. His presidential campaign was rocked in October by the release of a 2005 "Access Hollywood" tape in which he talked about grabbing women by the crotch.

Trump recently attacked MSNBC host Mika Brzezinski on Twitter, calling her “low I.Q. Crazy Mika” and saying she was "bleeding badly from a facelift" at a gathering at his Florida resort around New Year's.