Iranian embassy in Turkey denies arrests of Iranians during protests 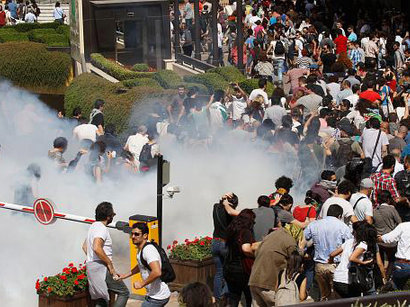 In a statement released on June 7, the embassy of Iran in Turkey also asked that the Iranians who live in Turkey to avoid appearing in areas restricted by the Turkish police.

The statement also said that one Iranian citizen has been detained by the police last week, yet was immediately released right after detention.

The protests against the reconstruction of the park Gezi in Taksim Square in Istanbul have been going on for 9 days already, and continue in different cities of Turkey.

Turkey`s prime minister Turkish Prime Minister Recep Tayyip Erdogan said on June 6 that 5 foreigners involved in protests were arrested, and two of them were Iranian nationals.

Erdogan has said earlier that the protests have ideological nature and are directed against the government.

The statement from Iran`s embassy came 3 days after Turkish Today`s Zaman newspaper reported 15 foreign citizens being arrested in Turkey during the protests, and most of them have turned out to be Iranian nationals.

Another Turkish newspaper reported on June 4 that another Iranian national named Ramin Sarabi was arrested in Erzurum on charges of leading an attack plot. According to the investigation by the public prosecutor`s office in Erzurum, Sarabi is believed to have links to the Iranian Revolutionary Guards.

Spokesman for Iran`s Foreign Ministry, Abbas Aragchi on June 5 also dismissed possibility that Iran had any involvement in protests in Turkey.

Aragchi noted that the Iranian side asked the Turkish government to clear the media-published claims regarding Iran`s involvement.

He rejected the fact that Iran`s intelligence services participated in the unrests in Turkey.
According to Aragchi, the Iranian side asked the Turkish side if any Iranians have been arrested during the protests, and if there are any, let Iranian side to have immediate access to those people.