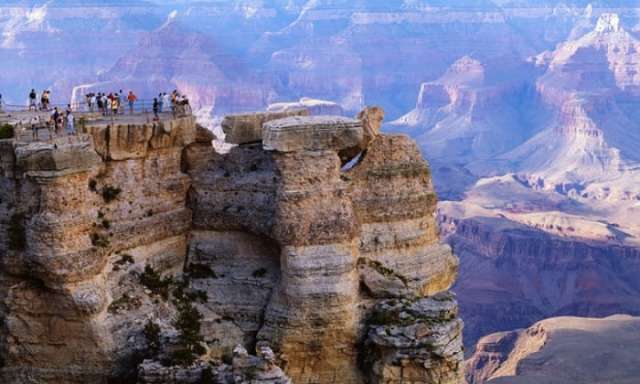 The Trump administration’s decision to reverse a ban on the sale of plastic water bottles in some of America’s most famous national parks, such as the Grand Canyon shows “the corporate agenda is king and people and the environment are left behind”, campaigners have said.

The comments come after the administration ended a policy that allowed parks to ban the sale of plastic bottled water in an effort to curb pollution.

“This policy was a win-win for everyone except the bottled water industry, which is only interested in its bottom line,” said Lauren DeRusha Florez, a campaign director for Corporate Accountability International, a group that campaigns against corporate abuses.

The change means national parks will no longer be allowed to ban plastic bottled water, after Trump administration officials ended a six-year-old policy put in place to curb pollution.

The National Parks Service, responsible for America’s most celebrated wilderness areas, announced the change in a press release that closely echoed lobbyists’ arguments against the ban.

“It should be up to our visitors to decide how best to keep themselves and their families hydrated during a visit to a national park, particularly during hot summer visitation periods,” said acting National Park Service director Michael Reynolds. He said parks would continue to encourage people to use free bottle filling stations, “as appropriate”.

The same argument was used by the bottled water industry’s main mouthpiece, the International Bottled Water Association, just last year. Members of the lobbying organization include representatives of bottled water giants such as Nestlé, which sells brands such as Poland Springs, Perrier and San Pellegrino in North America.

Just six years ago, the parks service encouraged America’s 417 federal parks to end bottled water sales where practical, arguing that the system needed to be “an exemplar of sustainability”. Parks that did ban bottled water only did so after installation of water bottle filling stations and a campaign to inform visitors where those filling stations are.

Since 2011, 23 of America’s most famous parks had ended bottled water sales, such as the Grand Canyon and Zion, which together draw 10.2 million visitors in 2016 alone. Last year, 331 million people visited America’s national parks.

Plastic bottles at the Grand Canyon alone comprised 20% of the park’s waste, and 30% of its recyclable waste.

Plastic bottles were also a major contributor to trash that ended up along walkways and “below the rim” of the landmark canyon.

Already, the world consumes more than 1 million plastic water bottles per minute or roughly 20,000 per second. Environmentalists fear the growth in plastic water bottle sales could rival the impact of climate change, as recycling efforts fail to keep up with demand, and plastic ends up littering coastlines in particular.

Some of the national parks that had made the change included seaside areas, such as Cape Hatteras National Seashore in North Carolina, and Biscayne National Park outside of Miami, Florida.

The policy change came after just a few months of lobbying by the International Bottled Water Association, which began its campaign in January, after Donald Trump’s inauguration, and spent $80,000 arguing against the “bottle ban”. National parks fall under the Department of Interior’s umbrella, an agency now headed by Trump appointee Ryan Zinke.

One of Trump’s most recent appointments to the Department of Interior’s is deputy secretary David Bernhardt, a Colorado-based lobbyist for Brownstein Hyatt Farber Schreck who specialized in water-related lobbying. Some lawmakers raised concerns about Bernhardt during his confirmation hearings, just a few weeks ago.

“He is another conflict-ridden, climate dismissing Trump appointee who favors profits over people,” said liberal Democratic senator Elizabeth Warren during his confirmation hearing. “I am alarmed by his willingness to serve as the corporate rubber stamp that President Trump wants. Mr Bernhardt is a walking conflict of interest.”

Bernhardt’s lobbying firm recently represented Nestlé in a dispute over a bottling plant in Colorado. Nestlé denied even knowing Bernhardt.

“No one in the General Counsel’s office at Nestlé … has ever met or spoken to Mr Bernhardt and frankly was not familiar with him until these irresponsible claims were made,” the company told the Washington Post.

Several of Zinke’s actions have also concerned conservationists. The Department of Interior is “reviewing” rules that govern oil and gas drilling in national parks, such as inside Florida’s Everglades. State officials have also begun lobbying Zinke’s department to allow uranium mining near what is arguably America’s most iconic park, the Grand Canyon.

In June, Zinke defended a proposed $400m cut to national parks in Trump’s budget, a slash that would have required staff cuts at 90% of the nation’s parks. Zinke’s department is also reviewing whether to cut 27 national monuments declared since 1996, which together encompass 1bn acres of public land.