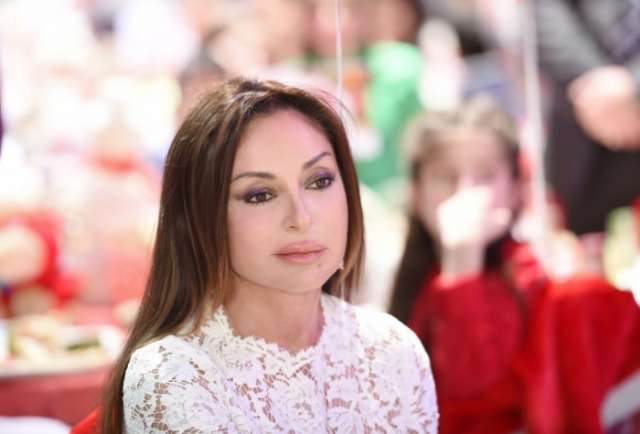 Mehriban Aliyeva was born in Baku. She graduated from secondary public school No. 23 in Baku in 1982 with a gold medal, and later entered the Nariman Narimanov Azerbaijan State Medical University.

She continued her studies at the Sechenov Moscow Medical Academy (currently the I.M.Sechenov First Moscow State Medical University), from where she graduated with an honorary diploma in 1988. She worked at the Moscow Scientific Research Institute for Eye Diseases under leadership of academician Krasnov in 1988-1992.

In 2002, she was elected as president of the Azerbaijan Gymnastics Federation.

Mehriban Aliyeva has been heading the Heydar Aliyev Foundation since the very date of its establishment on May 10, 2004.

On August 13, 2004, Mrs. Aliyeva became a designated UNESCO Goodwill Ambassador for promoting national literature and the musical heritage of Azerbaijan.

She was also awarded the title of ‘Woman of the Year’ in 2005 according to the social poll held in Azerbaijan.

On June 9, 2005, Mrs. Aliyeva was awarded the order of the ‘Ruby Cross’ from the International Charitable Foundation ‘Maecenas of the Century’ for her public support and charity activities, considerable contribution to the support of educational and cultural institutions and strengthening friendships between the peoples of Russia and Azerbaijan.

Mehriban Aliyeva received a PhD in Philosophy in 2005.

On November 24, 2006, she was awarded the title of ISESCO (Islamic Educational, Scientific and Cultural Organization) Goodwill Ambassador for extensive and selfless activity in various fields, including intercultural dialogue, attention to children in need of special care and support for improving living conditions, great support for education and projects being realized in the Islamic world.

The World Health Organization (WHO) awarded Mrs. Aliyeva for her exceptional services in protecting and strengthening the health of mother, child and family. This was made upon a unanimous decision of the 120th session of the WHO executive committee in Geneva on January 29, 2007.

Mehriban Aliyeva was honored with ‘Gold Heart’ international award in 2007 for her charitable activities and the outstanding achievements in services to the highest ideals of humanity.

She was also awarded the ‘Grand Commander's Cross of the Order of Merit of the Republic of Poland’ on September 14, 2009. She received this Order for her contribution to development of friendly ties between Azerbaijan and Poland.

She was also honored with the Crans Montana Forum’s Gold Medal on June 24, 2011.

Mehriban Aliyeva was elected the deputy chairperson of the ruling New Azerbaijan Party at the fifth meeting of the party on June 7, 2013.

She was awarded an honorary prize of the Turkish-German Friendship Federation in May 2014 for her contributions to dialogue between civilizations, as well as for the services towards promotion of the Turkic world in Germany and development of relations between Azerbaijan and Germany.

She received the Olympic Excellence award of the International Olympic Academy in Athens on June 16, 2014.

Under the order of President Ilham Aliyev, dated February 21, 2017, Mehriban Aliyeva was appointed the First Vice-President of Azerbaijan.

Mehriban Aliyeva is married, has two daughters and a son.