'We are thinking of long-term sustainable development' - UPDATED 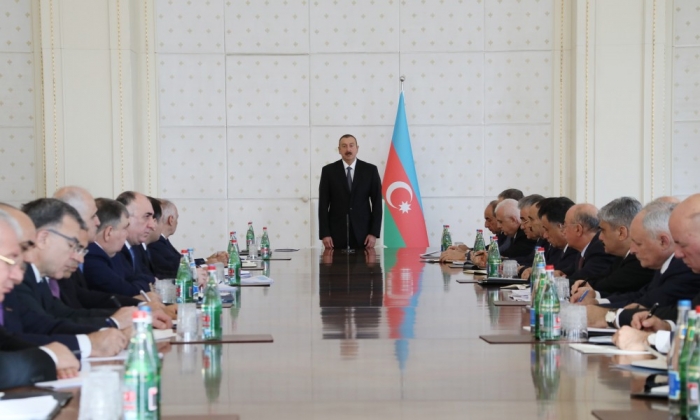 President of the Republic of Azerbaijan Ilham Aliyev has chaired a meeting of the Cabinet of Ministers dedicated to results of socio-economic development in the nine months of 2017 and objectives for the future.

Head of the state noted that the non-oil sector increased 2.5 percent as a result of policy pursued in recent years. He said that the industry section of the non-oil sector grew 3.1 percent, agriculture 2.8 percent, foreign trade turnover 7 percent. Aliyev stressed that currency reserves stood at $42 billion: “Our economic opportunities are one of the main conditions of the independency and we are thinking of long-term sustainable development. The currency reserves increased $4.5 billion and this is one of the successful issues of the nine months”.

President Aliyev also noted that 226,000 new jobs were launched in the reporting period. He underlined that infrastructure projects were implemented successfully and such projects contribute to general economic progress of our country: “New schools, medical centers were constructed and reconstructed. Solution of social issues of the IDPs has also been on the focus”.

The president said the restoration of Jojug Marjanli and creation of social infrastructure in the village was a historical event and IDPs will be provided with houses in 2017 and 2018.According to him, 250,000 IDPs have so far been provide with houses.

President Aliyev noted that Azerbaijan gained success in sports field and the Islamic Solidarity Games was organized at high level.

The head of state added that Azerbaijan strengthened its positions in the international arena, recognized as a reliable partner. According to him, he visited foreign countries 14 times and more than 10 heads of state and government visited Azerbaijan during the nine months and each of these visits is useful for Azerbaijan.

On October 9, President of the Republic of Azerbaijan Ilham Aliyev chaired a meeting of the Cabinet of Ministers dedicated to the results of the nine months of 2017 and future tasks.

The head of state made an opening speech at the event.

The head of state made a closing speech at the meeting.