Armenia, which destroys mosques, can never be a friend of Muslim states - President Aliyev 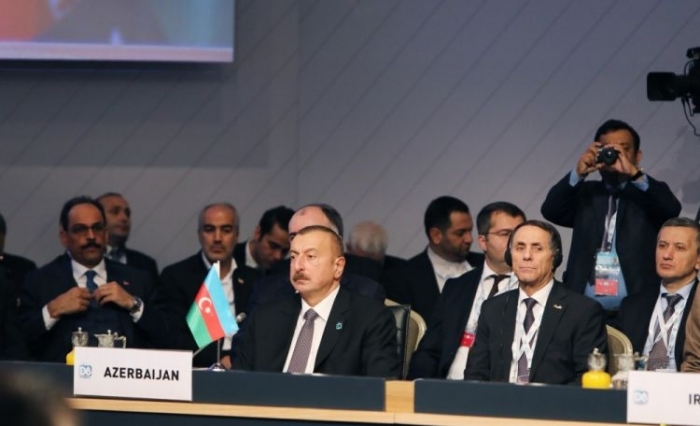 “For over 25 years Armenia is holding the historical lands of Azerbaijan - Nagorno-Karabakh and seven surrounding districts under occupation. Ethnic cleansing policies were implemented, and more than a million of our compatriots became refugees and internally displaced persons in these territories. In 1992, Armenia committed the Khojaly genocide. As a result of this military crime, 613 Azerbaijani civilians, including 106 women and 63 children were killed. Thousands of people went missing and wounded. The UN Security Council adopted four resolutions on the conflict,” Azerbaijani President Ilham Aliyev said while addressing the D-8 summit held in Istanbul.

The head of state said that these resolutions require the immediate and unconditional withdrawal of Armenian armed forces from Azerbaijani territories. “At the same time, the Non-Aligned Movement, the Organization of Islamic Cooperation, the OSCE and other organizations adopted similar decisions and resolutions. But the occupying Armenia ignores them and continues to commit military crimes against the Azerbaijani civilians. In April last year, civilians and servicemen were killed as a result of the Armenian armed attack on the contact line. Hundreds of houses were destroyed. Azerbaijan resolutely prevented this provocation of Armenia, and our army liberated some of our territories from Armenian occupiers. After that, Jojug Marjanli village, which was completely destroyed by Armenia, was rebuilt. A school, a medical center and a mosque were built in this village which consists of 150 houses. This mosque is similar to the Shusha Mosque destroyed by Armenians,” the president noted.

President Ilham Aliyev emphasized that Nagorno-Karabakh is the historical land of Azerbaijan. The head of state noted that the Armenian-Azerbaijani Nagorno-Karabakh conflict should be resolved within the framework of the UN Security Council resolutions. “The state and people of Azerbaijan will never allow the second fictional Armenian state to be established in its ancient lands. The territorial integrity of our country is not and will not be the subject of negotiations,” he added.

Noting that Azerbaijan considers Islamic solidarity particularly important and makes its contribution to this work, the head of state recalled that 2017 was declared “Year of Islamic Solidarity” in Azerbaijan.

This year Azerbaijan hosted the 4th Islamic Solidarity Games attended by 3,000 athletes from 54 Muslim countries. We are actively fighting against one of the world’s most serious threats in the today – Islamophobia. Armenia which is trying to pretend as a friend of Muslim countries destroyed mosques and religious monuments in Nagorno-Karabakh and surrounding districts. The country that destroys mosques can never be a friend of Muslim states,” said the president.