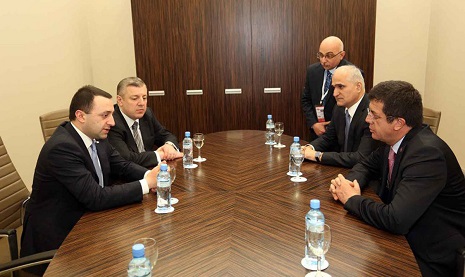 Expansion of the regional cooperation and full usage of potential are possible only after a fair settlement of the Armenian-Azerbaijani Nagorno-Karabakh conflict and liberation of the occupied Azerbaijani lands, Turkish Economy Minister Nihat Zeybekci said.

He made the remarks March 6 in Batumi, Georgia at the Azerbaijan-Georgia-Turkey business forum, the Azerbaijani Economy and Industry Ministry said.

The event was attended by over 350 officials and entrepreneurs from these three countries.

Turkish minister also noted that the relations between the three countries will further develop.

He said the large-scale projects, realized in the region, will strengthen the economic power of the three countries.

Georgia’s prime minister, Irakli Garibashvili, who also participated in the business, said that cooperation benefits all the three countries.

He added that these countries are major partners, and the large infrastructure projects realized in the region are a direct proof of this.

Garibashvili also highly assessed the investments of Azerbaijani and Turkish entrepreneurs in Georgia.

He also said the occupation policy of Armenia leaves it aloof from the regional development process.

The minister added that the non-settlement of the Armenian-Azerbaijani Nagorno-Karabakh conflict is a serious threat to the development of regional cooperation and peace in the region.

The two countries signed a ceasefire agreement in 1994. The co-chairs of the OSCE Minsk Group, Russia, France and the US are currently holding peace negotiations. Armenia has not yet implemented four UN Security Council resolutions on the liberation of the Nagorno-Karabakh and the surrounding regions.