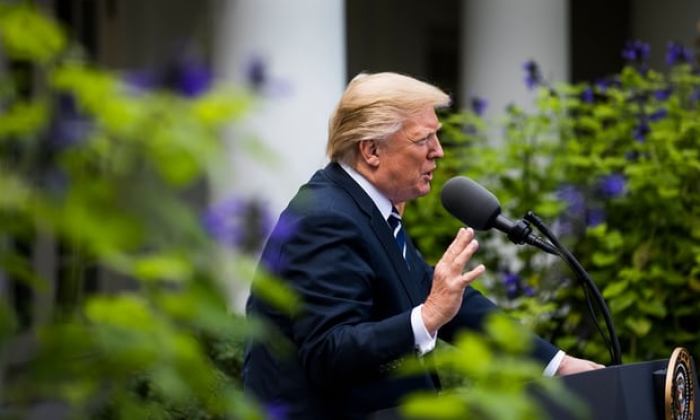 Donald Trump has begun his tour of Asia with a warning that “no dictator” should underestimate America, in a thinly veiled reference to the North Korean leader, Kim Jong-un, Guardian reports.

“No one, no dictator, no regime … should underestimate American resolve,” Trump told cheering servicemen and women after he landed at Yokota air base near Tokyo on Sunday on the first leg of his five-nation trip.

“You are the greatest threat to tyrants and dictators who seek to prey on the innocent,” he said, adding that authoritarian regimes could also take the route “towards prosperity and peace”.

“No nation should ever underestimate American resolve,” said Trump, who did not refer to North Korea by name. “Every once a while in the past they underestimated us. It was not pleasant for them, was it? We will never yield, never waver and never falter in defence of our people, our freedom and our great American flag.”

In what many believe is a low-risk start to a 12-day visit that will include stops in South Korea, China, Vietnam and the Philippines, Trump praised US servicemen and women and their counterparts from Japan, a “treasured partner and crucial ally”.

In another remark apparently directed at Pyongyang, Trump said US forces “always, always win. This is the heritage of the US armed forces, the greatest force for freedom and justice that the world has ever known.”

Japan’s prime minister, Shinzo Abe, is expected to seek assurances from Trump of Washington’s watertight commitment to security in a volatile Asia-Pacific region.

North Korea has launched two ballistic missiles over northern Japan in recent months, and has threatened to conduct a hydrogen bomb test in the Pacific Ocean to demonstrate it has developed the means to threaten the US mainland with nuclear weapons.

In what appeared to be a break with his prepared script, Trump promised the assembled troops that they would be receiving “a lot more” defence equipment. “No one makes it like they make it in the US. A lot of stuff is coming – use it well.”

In September, he said he would also allow Japan and South Korea buy “highly sophisticated” US military equipment to counter the North Korean threat.

After addressing troops, Trump travelled by helicopter to a private golf course north of Tokyo for an informal lunch with Abe, followed by nine holes with world number four Hideki Matsuyama. Later the leaders will attend a private dinner, complete with a performance of the Japanese viral hit Pen-Pineapple-Apple-Pen.

On Monday, Trump, accompanied by the first lady, Melania, will meet Japan’s emperor and empress. Later he will hold talks with Abe and meet relatives of Japanese citizens who were abducted by North Korean spies during the cold war.

Japan is the least testing stop on Trump’s trip, the longest Asian tour by any US president since George Bush in 1992.

Abe has consistently backed the president’s tough stance on North Korea – support that Trump lauded in his address.

“Japan is a treasured partner and crucial ally of the United States and today we thank them for welcoming us and for decades of wonderful friendship between our two nations,” he said, after swapping his suit jacket for a bomber jacket. “On behalf of the United States of America, I send the warmest wishes of the America people to the citizens of this remarkable country.”

But he can expect a more cautious welcome from the South Korean president, Moon Jae-in, when he arrives in Seoul on Tuesday. Trump’s bellicose rhetoric targeting Kim Jong-un has unsettled Moon, a liberal who this week said no military action should be taken on the Korean peninsula without his consent.

“And there’s been 25 years of total weakness and so we’re taking a very much different approach,” he added, without giving details.

He said he planned to meet the Russian president, Vladimir Putin, during his trip. “I think it’s expected that we will meet,” he said. “We want Putin’s help on North Korea.”

The tour comes at a precarious moment for Trump. A few days earlier his former campaign chairman was indicted and another adviser pleaded guilty as part of an investigation into possible collusion between his 2016 campaign and Russian officials.

Jonathan Pollack, a senior fellow at the Brookings Institution in Washington, said the trip comes “at a very inopportune time for the president. He is under growing domestic vulnerabilities that we all know about, hour to hour,” he said.

“The conjunction of those issues leads to the palpable sense of unease about the potential crisis in Korea.”