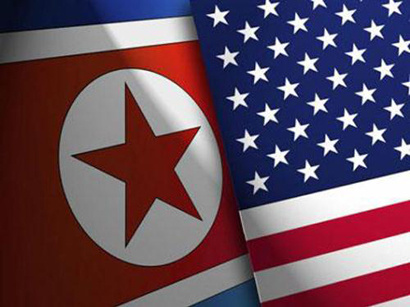 North Korea on Sunday offered high-level talks with the United States to ease tensions on the Korean peninsula, but the White House said that any talks must involve Pyongyang taking action to show it is moving toward scrapping its nuclear weapons, Reuters reported.

The offer came only days after North Korea abruptly canceled planned official talks with South Korea, the first planned talks in more two years. The North blamed the South for scuttling discussions that sought to mend estranged ties between the rival Koreas.

The North Korea National Defence Commission in a statement carried by KCNA news agency on Sunday said Washington can pick a date and place for talks and the two sides can discuss a range of issues, but no preconditions should be attached.

"In order to ease tensions on the Korean peninsula and to achieve regional peace and safety, we propose to hold high-level talks between the DPRK and the United States," said the spokesman for the North`s National Defence Commission in the statement. North Korea`s official name is the Democratic People`s Republic of Korea (DPRK).

"If the U.S. is truly interested in securing regional peace and safety and easing tensions, it should not mention of preconditions for the talks," the statement said.

The United States will discuss the new offer in meetings with Japan and South Korea in Washington on Tuesday and Wednesday, a senior administration official said.

Washington has been skeptical of any move by Pyongyang for dialogue as it has repeatedly backtracked on deals, the latest in 2012 when it agreed to a missile and nuclear test moratorium, only to fire a rocket weeks later.

"We have always favored dialogue and, in fact, have open lines of communication with the DPRK," said Caitlin Hayden, spokeswoman for the National Security Council.

"Our desire is to have credible negotiations with the North Koreans, but those talks must involve North Korea living up to its obligations to the world, including compliance with U.N. Security Council Resolutions, and ultimately result in denuclearization," Hayden said in statement.

"We will judge North Korea by its actions, and not its words and look forward to seeing steps that show North Korea is ready to abide by its commitments and obligations," she said.

White House chief of staff Denis McDonough, interviewed on the CBS "Face the Nation" program, said, "The bottom line is they`re not going to be able to talk their way out of the very significant sanctions they`re under now, sanctions that Russia supported and, very importantly, that China supported."

Earlier this year, North Korea threatened nuclear and missile strikes against South Korea and the United States after it was hit with U.N. sanctions for its February nuclear weapons test.

"North Korea`s proposal for dialogue to the U.S. is all part of the game to get economic aid as U.N. sanctions were tougher than before," said Kim Seung-hwan, senior associate at the Center for Strategic and International Studies.

The recent summit between U.S. President Barack Obama and Chinese President Xi Jinping might have played a role in the North`s changed attitude, in which the two leaders were on the same page regarding the North`s nuclear development, Kim said.

North Korea`s one major ally, China, has urged Pyongyang to abandon its nuclear weapons program and return to talks.

In the statement, Pyongyang reiterated it was willing to discuss disarmament but the world should also be denuclearized, including its southern neighbor.

North Korea agreed to a denuclearization-for-aid deal in 2005 but later backed out of that accord. It has said its nuclear arms are a "treasured sword" that it will not abandon.

Pyongyang also said it wants the United States to sign a peace treaty formally ending the 1950-53 Korean War that divided the two Koreas.

Korea was divided after World War Two and when the Korean War ended in an armistice rather than a permanent peace treaty, it left the two countries technically at war.

The North has a long record of making threats to secure concessions from the United States and South Korea.

North Korea`s 30-year-old leader, Kim Jong-un, took power in December 2011 and has since carried out two long-range rocket launches and a nuclear weapons test, as well as a campaign of threats against South Korea and the United States.

Threats have waned in the past month, showing signs of easing tensions such as proposing talks with South Korea in early June. The talks had been intended to discuss issues resuming operations of joint commercial projects and families split during the 1950-53 Korean War.

In the coming days, North and South Korea will mark the 60th anniversary of the Korean War and the armistice.