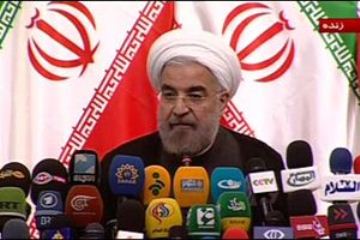 Iran is ready to show more transparency on its nuclear programme, says President-elect Hassan Rouhani.
In his first news conference since Friday`s election, Mr Rouhani described as "unfair" sanctions imposed on his country. He also said Tehran would not suspend uranium enrichment activities.

The US and Russia both expressed hope of progress on resolving the issue.

Speaking after talks with Russian President Vladimir Putin at the G8 summit in Northern Ireland, US President Barack Obama said they had "expressed cautious optimism" that following last Friday`s elections "we may be able to move forward on a dialogue that allows us to resolve the problems with Iran`s nuclear programme".

UK Foreign Secretary William Hague said: "The government hopes that following Dr Rouhani`s election, the Iranian government will take up the opportunity of a new relationship with the international community by making every effort to reach a negotiated settlement on the nuclear issue."