U.S. to be Iran`s good partner if concerns are eliminated 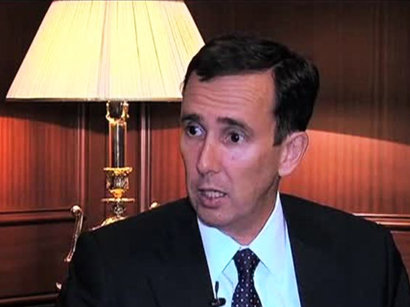 The United States respects the Iranian people`s selection in the recent presidential elections which led to Hassan Rohani winning.
Meanwhile there were substantial restrictions in the ability of people to have free speech and freedom of assembly in the country, the U.S. Department of State Persian language spokesman Alan Eyre said.

Eyre added that we welcome the Iranian citizens` decision to take part in voting despite restrictions to determine the density themselves and this is laudable.

"As the U.S. President said on June 17 during a meeting with his Russian counterpart Vladimir Putin, Washington hopes with caution about the future. Indeed, Rohani`s victory is potentially a hopeful sign, but we should wait for the next steps and see what happens," American diplomat said.

Reformist candidate Rohani was elected as Iran`s president with 50.7 per cent of the votes on June 15.
Rohani said during his first press conference on June 17 that his country plans to have good relations with all countries.

He underlined that Iran-US ties must be based on mutual respect, but Iran`s nuclear rights must be recognised.
Rohani further stressed that the two countries should focus their attention towards the future and then the two nations can talk to find a solution to solve their past problems.

The U.S. Department of State spokesman underlined that we should not forget that the main determiner in Iran`s nuclear programme is Supreme Leader Ayatollah Ali Khamenei.

He went on saying that the doors of nuclear negotiation haven`t locked yet and regarding this fact that Rohani said during his election campaign that he is determined to move toward detente and restoring relations with the international community, there are hopes that Iran would show enough willingness.

Eyre said that it is not a big problem for Iran to normalise its foreign relations, carrying out transparency and preforming its obligation based on the Non-Proliferation Treaty is enough to resolve the tensions.

The U.S. State Department spokesman emphasised that there is an opportunity regarding Rohani`s victory and if Iran can seize it, the U.S. can become a good partner for Iran.

Answering a question about the possible short term encouragement packet for Iran to inspirit Tehran for elimination of the nuclear dispute, Eyre said that the country`s nuclear tension is among international community in total and not between Tehran and Washington particularly.

"The UN Security Council has adopted several sanctions over Iran. Indeed, this is a global concern and the international community say with a loaded and univocal demand that Iran should cooperate in the nuclear issue", he said.

Eyre said the U.S. is ready to talks with Iran both in framework of P5+1 and direct face-to-face bilateral negotiations.