Lavenders and afterglows: How volcanic eruptions paint the sky 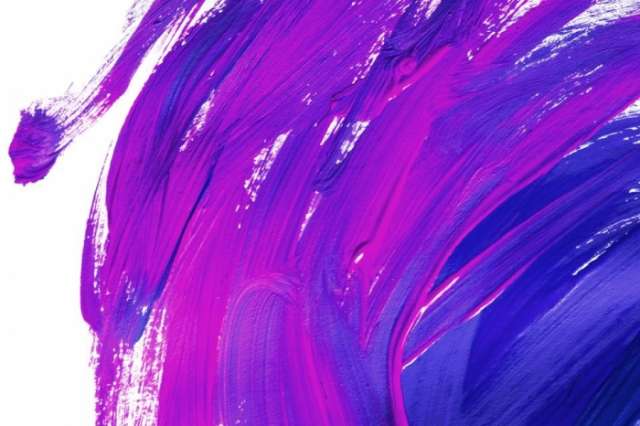 Volcanoes, just aesthetically speaking, are marvelous things. They’re the fiery forges of the planet; the crucibles of new crust, and leveler of the land, and the commanders of the climate – at least, over very long timescales. They provide us with mysteries, awe, stories and legends.
As you might expect, they’re a photographer’s dream, whether they’re erupting or whether they’re eerily quiet. It’s difficult to capture the Pandora’s box of natural science in a way that conveys how terrifying and glorious these angry mountains are, but thankfully, there are some marvelous shutterbugs out that there are patient enough and skilled enough to preserve that lightning in a bottle.

I’ve been writing a little about volcanic eruption columns lately, and during my research and recollection, it occurred to me that there’s an unofficial term lingering around out there related to them that’s just so mellifluous and wonderful that I thought a short explainer dedicated to it was worthwhile.

Did you know that volcanic eruptions change the color of the sky? I don’t mean blocking out the Sun, by the way – although they are great at doing that when they want to. In this case, I’m referring to the optical properties of the ash and aerosols they spew out so excitedly.

Remember that volcanic eruption in the 19th century that researchers still can’t find the source volcano for? Well as the phantom volcano did its thing, a few astronomers noted that the sunset, as viewed from South America, had a strange “afterglow,” a prolongation of the sunset itself, for several months. This, of course, was no coincidence. This afterglow was indubitably caused by a stratospheric aerosol veil, a blanket of ultra-small volcanic products suspended in the upper atmosphere.

There are plenty of different types, with sulphur dioxide and hydrochloric acid being fairly common examples. The latter condenses with water vapor and falls down to the surface below; the former reacts with the water and forms sulphuric acid. Sulphur dioxide tends to rapidly condense into fine clumps that hang around in this somewhat damp atmosphere for a couple of years or more, and these particles are particularly good at scattering sunlight.

Scattering essentially means deflecting, and depending on the physical chemistry of the molecules, different compounds scatter light – or various wavelengths of light – differently.

It’s called Rayleigh scattering, and our planet’s own unique atmospheric composition is ultimately better at scattering shorter wavelengths than longer ones. That means, in terms of the electromagnetic spectrum, purple light is scattered far more effectively than any other in the visible segment. As there’s far more blue light being emitted by our local star than purple – and our eyes are better at picking up blue light than purple – we see the sky as blue.

As I said, volcanic aerosols scatter light too. Sulphur dioxide is great at both scattering and reflecting sunlight back into space, which is why in large enough quantities they can rapidly cool the planet. They also scatter blue light too – and that’s where our beautiful nomenclature comes into play.

Our sunsets are reddish-orange because the sunlight has had to travel through a far thicker amount of atmosphere at that low angle. All that blue light is scattered so much more than usual, which means that some of the less deflected, longer wavelength yellows and reds are still heading toward us.

If you’ve got plenty of volcanic aerosols still up in the stratosphere, particularly on the horizon, then you’re just giving that poor blue light more particles to scatter off. That takes a little more blue light “away”, which reddens the sunsets even more. This seems to lengthen the sunsets, which creates that aforementioned afterglow.

Above your head, during twilight, the sky is still blue. Mixing blue with the more vibrantly red volcanic sunset gives you a glorious purple band, and that, my friends, is what we sometimes call volcanic lavender. Sometimes, you even get pink. 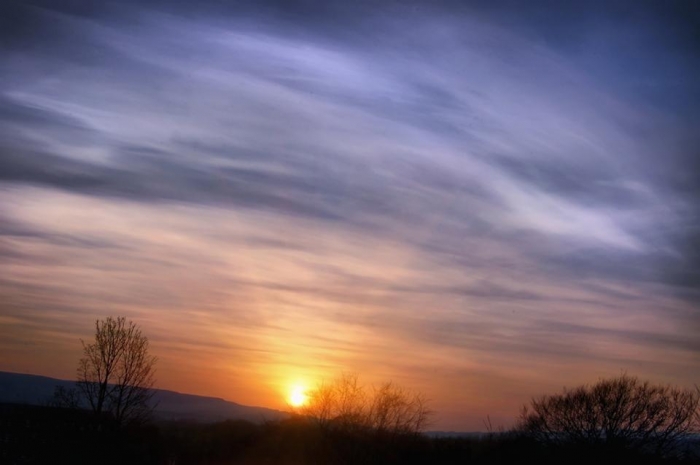 A volcanic lavender sunset, seen here in the UK after the 2010 eruption over in Iceland.

This additional scattering of light can also sometimes create faint red-brown rings around the Moon; they’re named Bishop’s rings, named after the Reverend S.E. Bishop (yep) that first observed them after Krakatoa blew its top.

No, it’s not really an official atmospheric term, at least as far as I know. It is, however, a subtle, beautiful atmospheric phenomenon, something that has implicitly or explicitly influenced artists across the world for centuries.

Munch was potentially inspired by volcanic sunsets, but it’s not clear that my favourite painter, van Gogh, was. It’s a shame, because not only would he have made such an event look surreal and spectacular with oil paints – a volcanic Starry Night, just imagine it – but he would have put pen to paper and described it with his characteristic eloquence too. 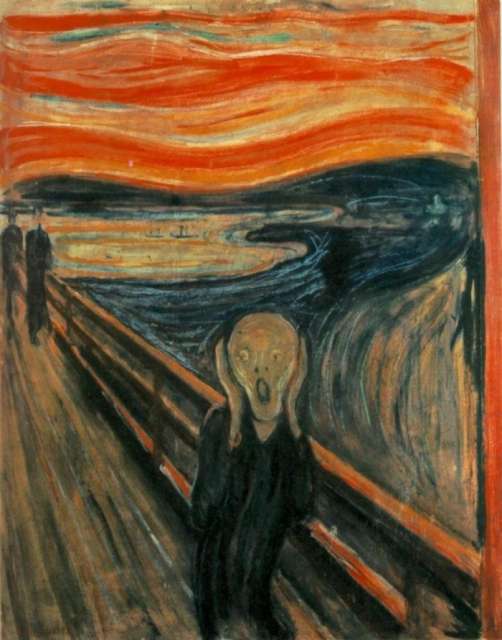 The sunset here is suspected by some of being inspired by Krakatoa's 1883 eruption, halfway across the world.

Perhaps he has. Krakatoa erupted a vast amount of aerosols into the stratosphere in 1883. In 1885, van Gogh wrote about “sunsets in black, in violet, in fiery red” in a letter to his brother, Theo. He spoke of violet tones in the sky on several occasions, and although he could have just perceived those hues using his famous post-impressionistic eye, I, for one, like to think volcanic fireworks contributed to his canvas.