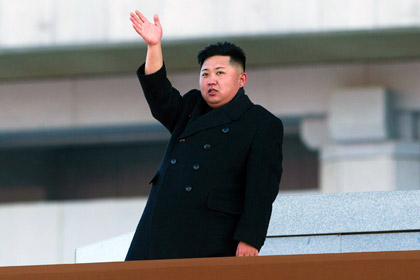 The North Korean leader reportedly gave out copies of Hitler`s ideological tome Mein Kampf to select senior officials recently, according to North Korean watchdog news site New Focus International.
The so-called Nazi bible, written by Hitler while in prison in 1924, was given out in honor of Kim`s birthday in January, the site claims.

“Kim Jong-un gave a lecture to high-ranking officials, stressing that we must pursue the policy of Byungjin (Korean for `in tandem`) in terms of nuclear and economic development," an anonymous source told New Focus International by phone.

"Mentioning that Hitler managed to rebuild Germany in a short time following its defeat in WWI, Kim Jong-un issued an order for the Third Reich to be studied in depth and asked that practical applications be drawn from it."

The gift might be part of a campaign to create a more intimidating persona for the young leader, Shirley Lee, New Focus`s international editor, told the Washington Post. The Post also noted that leadership and nation-building -- not anti-Semitism -- seemed to be the intended significance of the gift.

Many books are banned in North Korea, according to the Washington Post, and the consequences for owning a banned book can be quite severe. In 2009, a Christian woman who was accused of distributing copies of the Bible was allegedly executed, according to the Associated Press.

While possibly startling to Western countries that opposed Hitler`s actions during World War II, North Korea is not the first country that maintains a healthy appreciation of the German`s leadership skills.