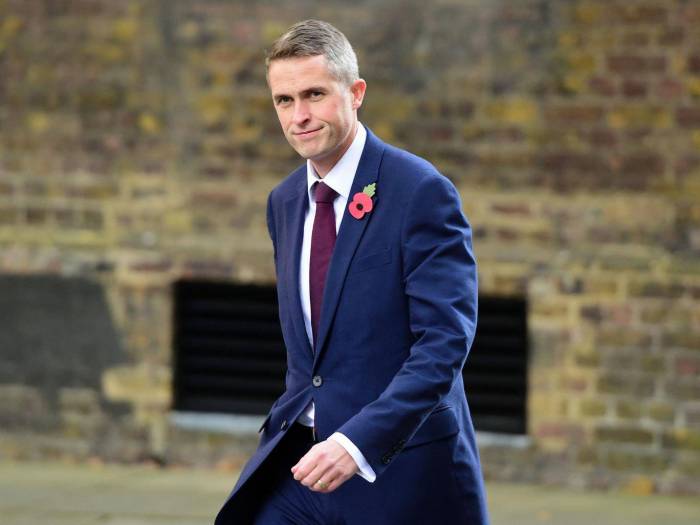 Allies of the Defence Secretary also suggested Mr Williamson has been the victim of “smears” after speculation was raised last week that he was on leadership manoeuvres.

On the same day he made the comments about Russia, Mr Williamson also admitted having a “flirtatious” relationship with a former colleague while working for a fireplace manufacturing firm in Yorkshire in 2004.

But responding to claims in the Sunday Times that he had leaked intelligence, a Ministry of Defence (MoD) spokesman said: “The Secretary of State did not release any classified material at any point during discussions with the media.

“There has been no leak of intelligence on the subject from either the Secretary of State or the Ministry of Defence.”

Responding to the claims, one of Mr Williamson’s allies told the newspaper: “This is an attempt to promote the leadership campaign of someone else.”

Speaking to The Telegraph last week the Defence Secretary said Russia had been looking at the UK’s critical infrastructure such as power stations and interconnections that allow the transfer of electricity across borders.

“Russia's actions are not limited to Europe's eastern borders — the threat to British livelihoods is severe and real,” he said.

But the Russian defence ministry dismissed the claims - and suggested Mr Williamson had “lost his grasp on reason”.

“His fears about Russia getting pictures of power plants and studying the routes of British pipelines are worthy of a comic plot or a Monty Python's Flying Circus sketch.”

The extraordinary row follows heightened speculation that Mr Williamson could be preparing for a leadership bid should Theresa May step down as Prime Minister. One senior Conservative source told the i newspaper on Friday: “Gavin wants to be leader – that’s clear”.

Mr Williamson, who is also in the spotlight for a series of unanswered questions regarding a relationship with a former colleague, got his big break in 2013 as parliamentary private secretary to David Cameron, serving in the post for three years. He was selected by Ms May as her parliamentary campaign manager for the Conservative leadership contest triggered by Mr Cameron's resignation following the EU referendum.

He was promoted from chief whip – responsible for party discipline – to Defence Secretary when Michael Fallon resigned from the position late last year after being accused of making inappropriate advances towards a journalist in 2002.