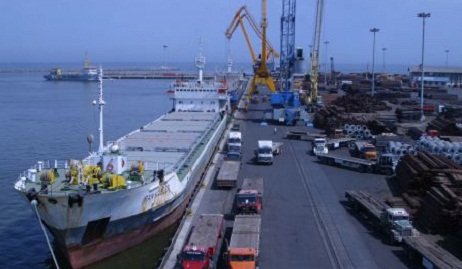 The intensification of international sanctions has greatly narrowed Iran`s maritime trade, and the last foreign shipping line has stopped operating at the most important Iranian trade port,namely Shahid Rajaei port, Tabnak website reported.
According to the website, the main reasons were sanctions of the West and internal mismanagement in the Ports and Maritime Organization.

Shahid Rajaei port, which is located near the Strait of Hormuz in Southern Iran, is the country`s key port for importing and exporting goods. Tidewater of the Middle East Maritime Company is the main operator at the port.

To remove problems of the activity of Tidewater at the port, it was decided to transfer the responsibility to other companies. But, mismanagement in the Ports and Maritime Organization ruined all the decisions and led to the intensification of the sanctions by the West.

In addition to the restriction of the activity of foreign shipping line in Iran, the Iranian shipping lines are also restricted by international sanctions, which have targeted Iran`s trade, financial, industrial, oil and gas sectors.

Iran`s oil revenues have declined drastically due to a fall in the number of customers as well as the lack of international insurance for its tankers. The country is facing financial and banking sanctions, which have created problems for transferring money to inland.