April Fool's Day 2018: How the EU trolled Britain - and all the best pranks from around the world 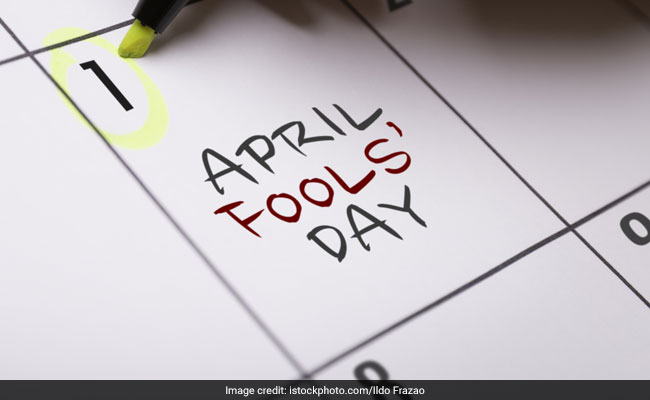 Today is the day for real fake news. It's April 1, which means companies, newspapers and japesters around the world try to make fools of us with pranks.

And because it's Easter Sunday too, you can expect some of the gags to have a recurring theme.

Here's a round-up of some of the jokes so far.

How the EU trolled Britain

The European Parliament has poked fun at Britain - and, specifically, our new blue post-Brexit passports, with its April Fool's joke.

It claimed that "all EU passports [are] to become dark blue"  - which would render our symbolic passport choice useless.

The joke has been widely praised by Remainers. Sarah Wollaston, a Tory MP who supported Remain during the referendum, tweeted: "Best April Fool of the day."

It's Easter, so of course chocolate needs to be on everything. Burger King certainly think so, creating its first Chocolate Whooper.

The fast-food chain got into the spirit early this year, posting a video on Friday announcing the release of a dessert version of its signature Whopper burger. “Coming soon to your local Burger King. maybe,” it teased.

According to the video, the Chocolate Whopper includes a chocolate cake bun, a “flame-grilled chocolate patty,” raspberry syrup instead of ketchup, white chocolate rings that resemble onions, candied blood oranges rather than tomatoes, milk chocolate “leaves” of lettuce and vanilla frosting “mayo”.

That actually sounds quite tasty.

The Observer has opted for a Brexit-themed spoof this year. It reports that an Italian firm is planning to cash in on the debate by creating official Brexit and Remain emojis, dubbed Brexit Bulldog and Starry Blue.

A paid-for app download is due to be launched on Sunday, giving people the option to use the emojis to give their social-media profiles a Brexit “brand identity”, Scherzo Primavera reports for the newspaper.

The European Collective – a group of pro-Brexit Conservative MPs –and the Remain Group – an umbrella organisation representing pro-EU MPs – both condemned the app as “making money out of politics”.

“Nobody who campaigned in the referendum wanted to give shadowy organisations the chance to exploit British voters,” the groups said in a joint statement. “Brexit is far too serious a matter for foolish jokes.”

Harry's stag do - in a yurt rereat

According to the Mail on Sunday, Meghan Markle has organaised the trip to the foothills of the Beacons for him.

She has chosen a holistic £750-a-night campsite run by her reiki-master friends Mungo Chavez and Jetsun Khandro, who have carefully erected a cluster of sustainable felt yurts in a circle of prehistoric Preseli bluestones, Flora Pilo writes.

"Meghan wants Harry to spend the weekend getting grounded, not inebriated," a friend told the newspaper. "She thinks a weekend of meditation and chakra-cleansing in Wales will fit the bill perfectly."

The company said research showed their new flavours were among the most favoured by the "brunch-loving, superfood-snacking millenial", the Sunday Mirror reports.

Coca-Cola said in a statement to the newspaper: "Not only do they promise to be the perfect tasty, sugar-free refreshment, but they’ll also double-up as the ideal accessory for any brunch time social media photo – guaranteed to see the ‘likes’ rolling in."

The Sun on Sunday have played with two topical subjects: VAR and virtual realty. It says that referees at the World Cup will use £5,000 VAR headsets in order to speed up controversial video decisions.

The technology means referees will no longer have to rush to view a pitchside TV to check a decision. Instead, they will be able to see VAR images instantly on a 3D digital screen, the newspaper reports.

Its built-in gridwork of digital lines super-imposed across the turf allows refs to make accurate offside calls while a unique motion scanner can also detect players diving - all in real time.
Fifa spokesperson Avril Blague told the newspaper: “The trials proved this headset is the future for VAR.”

Last year, it launched the Google Gnome, an AI speaker for your garden. This year, the internet giant is having some fun with its Maps service.

When you open the app, a playable version of Where's Wally pops up. "He shared his location in Maps, but he's in a crowd. Find him and his friends as they travel around the world," a message reads.

The police Down Under love a social media joke, especially the Queenland Police Service.

This year, it cracked an Easter-themed joke. In a statement on Facebook, it said police were investigating after "many children have woken up to find fruit hidden inside Easter Egg wrappers".

"Eggsperts say parents might be playing the April Fool or it could be a case of sour grapes," they said.

Tasmania's police, meanwhile,  showed off their new highly-trained Hoon Dog Elvis. "Elvis, our highly-trained Hoon Dog responds to octane content and engine decibels to identify hooning cars," the service said. "While opponents have criticised him for the fact he aint never caught a rabbit, we're satisfied that he ain’t nothing but a Hoon Dog."

Richard Branson often gets in on the April Fool's Day fun. This year, his airline Down Under, Virgin Australia, launched Spin Class, the world’s first in-flight cycling studio.

The new cabin class allows passengers to burn calories on board during long haul international flights.

Virgin Active Cycle Head Coach, Emma Masters said: “Each Spin Class has been designed to achieve optimal in-flight heart rate and maximum calorie after-burn in the case of the Jetlag Buster and Spin & Sleep classes. For those looking to relax, the Cruise in the Clouds options provides a more laid-back workout.”

SodaStream has introduced SodaSoak, a sparkling water marker for the bath.

Game of Thrones star Thor Bjornsson and reality star Reza Farahan featured in the launch the SodaSoak which told viewers the SodaSoak "didn't just stop at tickling your tongue".

Daniel Birnbaum, CEO of SodaStream, said: “SodaStream is always looking for disruptive ways to create moments of joy and April Fools’ Day is the perfect time to do so”.

As for Icelandic man mountain Thor Bjornsson, he’s on a war against plastic. “The thing about SodaStream’s campaigns,” he said, “is that they address important themes — health and wellness or the global plastic bottle pollution problem — in a lighthearted and funny way that keeps a finger on the pulse of pop culture.”

The original article was published in the Telegraph.