World Map of literally translated country names will amaze you 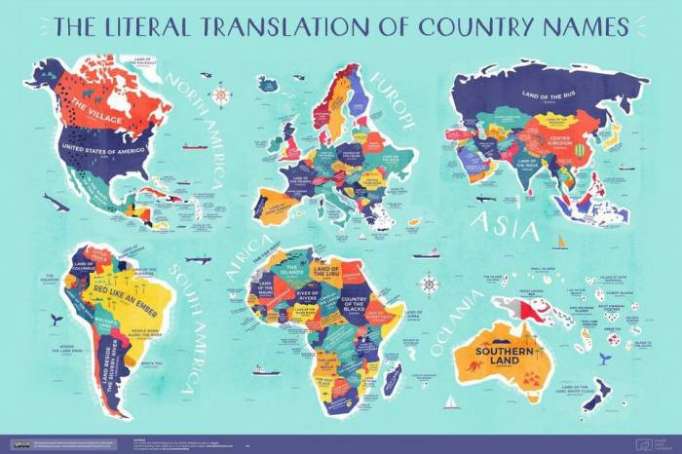 Have you ever stopped and thought about the name of your home country or one you’re traveling to?

What it means, where it came from, how it came to be?Etymology - the origin of words - is a fascinating subject on its own (especially for a word geek like me), but apply it geographically and it throws up a smorgasbord of interesting, out-there and downright weird place names to ponder over, revel in and as often as not, laugh out loud at. It can also reveal a lot about the history of a land and its people, their suffering and success, whether they were conquered or conquerors, their origins and their lives.

Fancy a trip to the Land of the Many Rabbits, anyone? Then surprisingly you’re off to Spain. How about a holiday in Hippopotamus, better known as Mali? And while the Land of Honest Men may sound promising, its more familiar name of Burkina Faso reveals it’s actually ranked as only the 74th least corrupt nation. Perhaps the neighbouring Land of Argument, aka Benin, is a more honest assessment of what to expect. Me, I think I’ll just head for I Go To The Beach, which is the literal name for the tiny island nation of Nauru in Oceania. What could go wrong? (That’s not a place name, by the way.)

This global map of literal translations of country names from Credit Card Compare is extraordinary and insightful. Scroll down to see each continent individually so you can find your country—and who knows, perhaps I’ll see you in The Land of the Thunder Dragon soon…

One thing that quickly becomes apparent is just how many places are named from mistakes—poor translations, miscommunication between locals and visitors, and the inevitable tweaks that come from the passing of history and language orally over generations. If you want to find out more about a country name, trusty Wikipedia has a great etymological list. Oh, and if the images look too small just zoom in or open them in a new tab—they're high resolution so you should be able to read every place name. 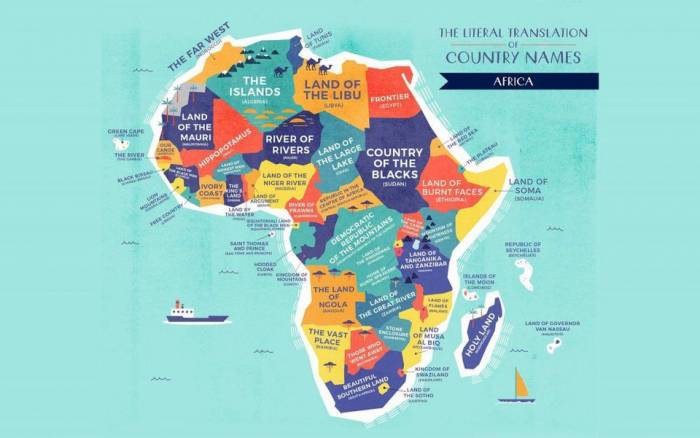 Africa's naming reveals a story of colonization and natural resources.

The Africa map is for me the most fascinating because of the diversity of names. The cradle of civilization, its translations tell a story of indigenous people, colonisation and names derived from from faraway nations – Ethiopia as the Land of Burnt Faces from the Greek, Sudan as the Country of the Blacks from the Arabic.

Then there are names that reveal glimpses into local cultures. Malawi as Land of Flames, thought to describe the ancient local ritual of burning dead grass away to prepare the land for cultivation. Senegal becomes Our Canoe, thought to be from a miscommunication between Portuguese sailors listening to local fishermen talking about ‘sunu gaal’, local Wolof dialect for ‘our canoe’.

There are of course more obvious examples—Land of the Large Lake for Chad, Lion Mountains for Sierra Leone—as well as the more random, my favorite of which has to be Botswana or, Those Who Went Away. 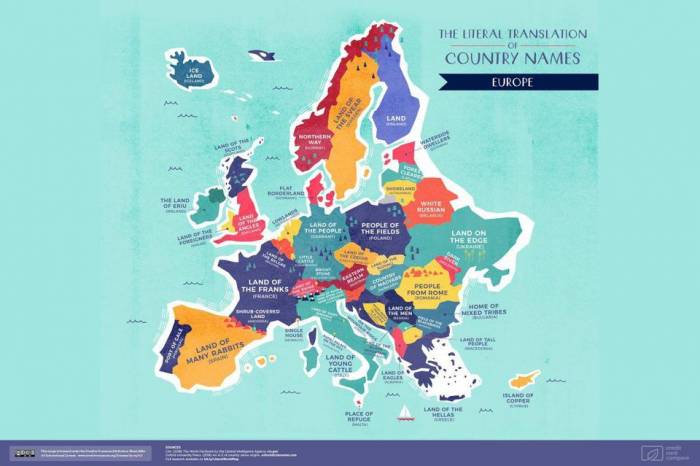 Europe is a story of explorers and conquerors.

Europe is a continent of explorers and conquerors, of mixed races, ethnicities and cultures—and its names suggest as much.

France—the Land of the Franks—comes from German tribes the Franks. Its old German word ‘franka’ means fierce, so France becomes the land of the fierce, which seems somehow less appropriate these days. Norway is a literal adaptation of Northern Way referring to an ancient Viking route. Wales too simply comes from the Anglo-Saxon term for a non Anglo-Saxon, Wilisc, or rather Land of the Foreigners. 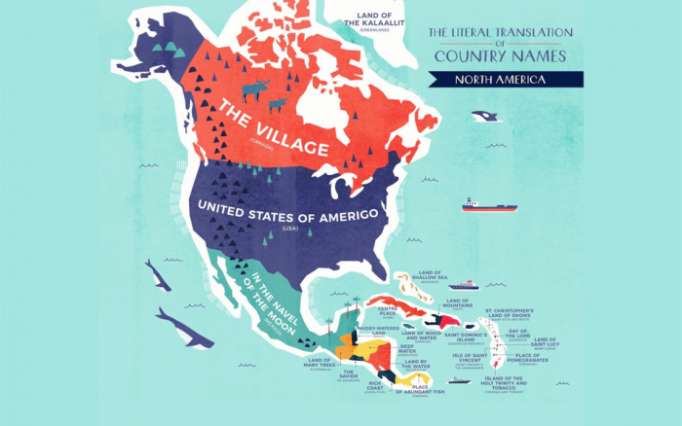 North America's names are rife with literal and descriptive meanings.

The name America likely comes from Italian explorer Amerigo Vespucci, the first person to realize the entire continent was its own landmass rather than a part of Asia.

Others are more gloriously literal and in modern terms, quite poetic. Panama is a Place of Abundant Fish, Guatemala a Land of Many Trees and Granada a Place of Pomegranates.

A history of colonization is also obvious. Mexico is the simplified Spanish translation of a Nahuatl name for the Aztec capital, which means In the Navel of the Moon. 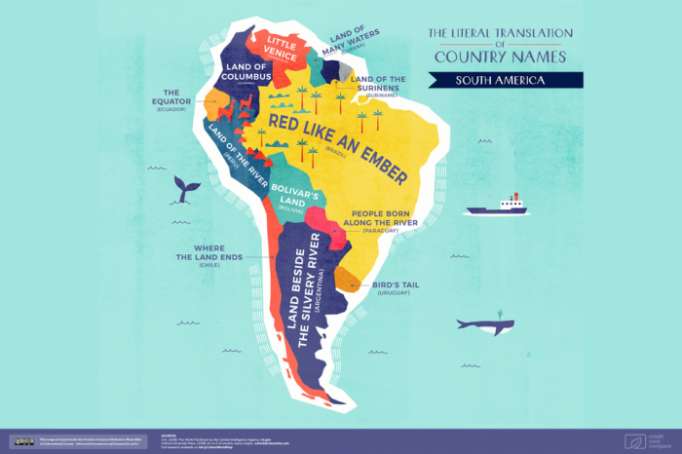 South America is a land described by its abundance and rivers.

The equator passes through three countries in South America yet only Ecuador is named after it. Otherwise there’s a distinctly watery theme – Argentina as the Land Beside the Silvery River referring to the Río de la Plata, Venezuela literally Little Venice as its native stilt houses reminded explorers of Venetian architecture, and Guyana the Land of Many Waters from an indigenous language.

Perhaps most intriguing is Brazil, which simply translates as Red Like An Ember. It likely comes from the Portuguese Terra do Brasil referring to brazilwood or redwood - a name derived for its similarity to red hot embers. 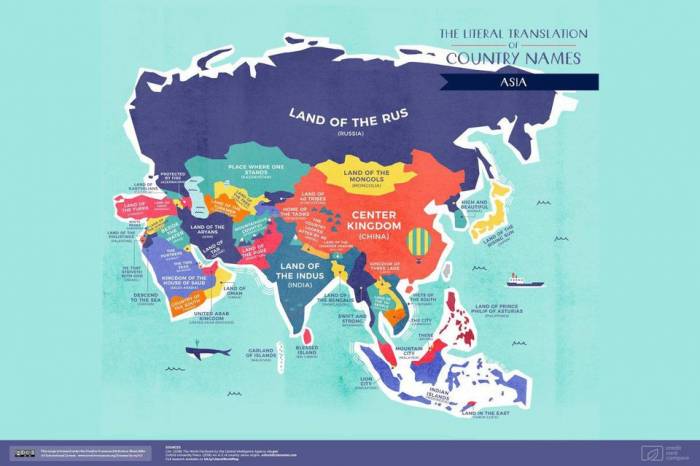 The world’s biggest and most populated continent is unsurprisingly rife with extraordinary and intriguing place names.

Almost landlocked Iraq, with a tiny 36-mile-long coastline, can be interpreted as Beside the Water from the Arabic al-’irāq. But rather than the sea it likely refers to its location astride Euphrates and Tigris rivers. Azerbaijan’s intriguing Protected by Fire moniker refers to an Azerbaijani phrase and cultural concept denoting its entire geography - the metaphysical realm of mortals.

Myanmar, or Burma, has a complicated history for one of the more complimentary translations in this world map – Swift and Strong. Named Burma for the nation’s largest ethnic group, the Burmans, it’s a slow adaptation from Portuguese and previously various Indian language words and a colloquial oral version of the old Burmese word Mranma, which became Myanmar. ‘Myan’ means swift and ‘mar’ tough or strong. 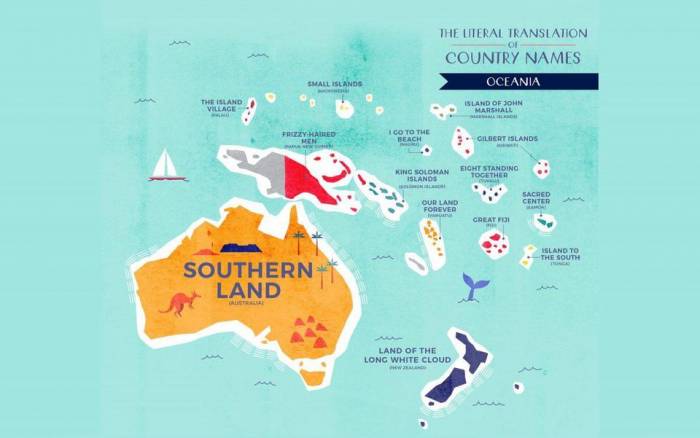 Exotic Oceania's tiny island nations have some of the most intriguing and endearing names.

It was the Greeks who prosaically labelled modern day Australia Terra Australis Incognita, or unknown Southern Land. Equally as uninspired, New Zealand comes from the Dutch province of Zeeland or sea land - but we prefer its ancient Maori name Aotearoa which translates to a more inspiring but equally as apt Land of the Long White Cloud.

Slightly less inspiring but far funnier is Papua New Guinea. The New Guinea part comes from Spanish explorer Yñigo Ortiz de Retez who thought the locals resembled those he’d seen along the Guinea coast of Africa, but Papua refers to the Malay word papuah and describes the unique hairstyles, particularly of the Papuan men—hence Frizzy-Haired Men!