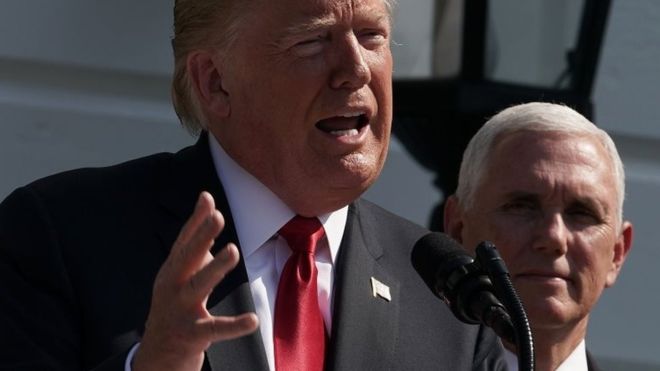 US Vice-President Mike Pence has dismissed speculation he is the author of a damning anonymous editorial that attacks President Donald Trump.

The New York Times article, said to be written by a White House official, says Mr Trump's own appointees are trying to stifle his agenda.

Fierce speculation surrounds who was responsible but a spokesman for Mr Pence denied it was him.

Mr Trump described the writer as "gutless" and the newspaper as "phony".

"The @nytimes should be ashamed and so should the person who wrote the false, illogical, and gutless op-ed. Our office is above such amateur acts."

The theory that Mr Pence wrote the article largely stems from the use of the word "lodestar", a term meaning "star that leads or guides" and one which the vice-president has frequently used.

In the New York Times piece, published on Wednesday, the author refers to the late Republican Senator John McCain as a "lodestar for restoring honour to public life and our national dialogue".

"I come from a place where if you're not in a position to execute the commander's intent, you have a singular option, that is to leave," he said.