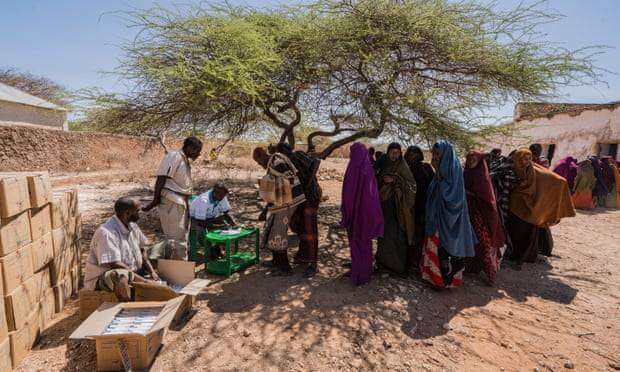 Global hunger has reverted to levels last seen a decade ago, wiping out progress on improving people’s access to food and leaving one in nine people undernourished last year, with extreme weather a leading cause, the UN has warned.

Hunger afflicted 821 million people last year, the third annual rise since 2015, with most regions of Africa and much of South America showing worsening signs of food shortages and malnutrition. More than half a billion of the world’s hungry live in Asia.

The reversal of progress made in slowing malnutrition in the first half of this decade has caused serious concern among international agencies. Climate shocks, such as droughts and floods, were identified by the UN as “among the key drivers” for the rise in 2017, along with conflict and economic slowdowns. Nearly 100 million people were left dependent on humanitarian aid during the year.

The UN report covers last year, and does not take account of 2018’s extreme weather which has brought heatwaves and high temperatures to much of the northern hemisphere, accompanied by droughts in some parts of the globe and floods in others. However, the changing climatic trends are likely to spell trouble for years ahead.

Robin Willoughby, head of food and climate policy at Oxfam GB, said the last few months were likely to have made the situation even worse, and called on governments to commit funds to help poor countries adapt to the effects of global warming. “The extreme weather we have seen this year is likely to have exacerbated the crisis,” he said. “A hotter world is proving to be a hungrier world.”

According to the report, there are more undernourished people in areas of the world that are highly exposed to extremes of climate. The authors note that there have been more frequent spells of extreme heat in the last five years, and that the nature of rainfall is changing in some areas, with rainy seasons starting earlier or later. Staple crops such as wheat, rice and maize are particularly at risk from climate extremes.

“It is shocking that, after a prolonged decline, this is the third consecutive year of rising hunger,” said Willoughby. “The inescapable fact is that climate change is now leaving people around the world without enough to eat.”

Adapting to climate change can be a matter of switching to less thirsty crops in some areas, and selectively breeding varieties for drought-resistance, or diversifying crops and using natural methods to make the best use of rainfall. Giving farmers access to transport to take their produce to market, and modern technology, such as weather forecasting communications, can also help.

The UN’s State of Food Security and Nutrition in the World 2018 report, released on Tuesday, is the joint work of the UN Food and Agriculture Organisation, the International Fund for Agricultural Development, Unicef, the World Food Programme and the World Health Organisation.

The heads of the agencies combined to warn of a worsening future, if action is not taken to help people adapt to climate change. “If we are to achieve a world without hunger and malnutrition in all its forms by 2030 [as the sustainable development goals state] it is imperative that we accelerate and scale up actions to strengthen the resilience and adaptive capacity of food systems and people’s livelihoods in response to climate variability and extremes,” they wrote in the foreword to the report.

The analysis also showed that one in eight of the world’s adults – 672 million people – are now obese. This is increasingly regarded as a form of malnutrition associated with poverty, as poor people often lack access to good quality food.

Other effects of malnutrition noted include 151 million children under five too short for their age owing to malnutrition, a fall from the 165 million recorded in 2012, with Asia accounting for 55% of the total. One in three women of reproductive age around the world have anaemia, which can also affect the development of their children, and only 40% of babies are breastfed exclusively to six months.