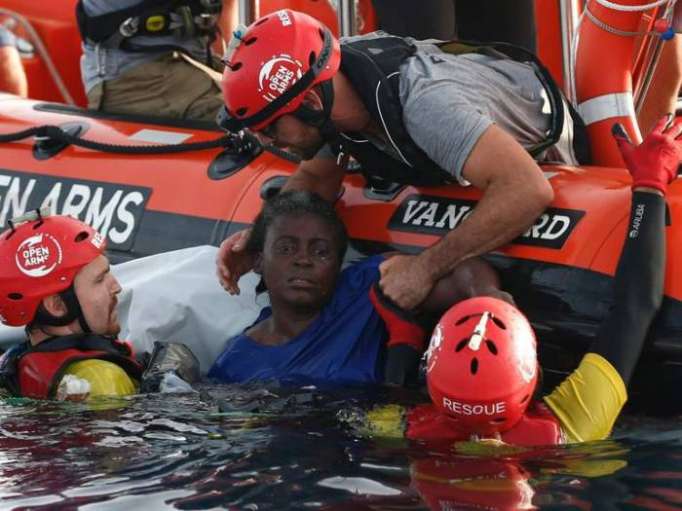 Survivors and rescue workers are reckoning with more than 100 dead following a disaster at sea off the coast of Libya that focused renewed attention on the perilous passage of migrants from Africa to Europe.

Survivors of a shipwreck discovered by Libyan and European authorities earlier this month and brought to the port of Khoms around 75 miles (120 km) east of the capital told the humanitarian group Medicins Sans Frontier (MSF) that at least 20 children were among those who died at sea, including two 17-month-old toddlers who drowned with their parents.

“I was telling to the woman on the phone, ‘Please come and rescue us,’” one migrant told MSF in an account provided to The Independent, describing the crucial moments when she sought to contact European coastal authorities with a satellite phone. “I was repeating, ‘Please, there are a lot of children and women.’ It was already too late. People started to drown.”

The shipwreck came as violence in the Libyan capital, Tripoli, spiked. On Monday gunman stormed the headquarters of Libya’s National Oil Company, killing at least two people. In the chaotic aftermath of the Nato-backed armed uprising that felled Libya’s ruler in 2011, Libya has become a major transit point for migrants seeking passage to Europe. Libya’s various authorities have cobbled together deals with European capitals to throttle the flow of migrants, but the country’s ongoing civil strife frequently distracts them. The UN says at least 20,000 people have arrived by sea to Italy from Libya this year.

One survivor told MSF their flotilla of two rubber seacraft was approaching the Maltese coast when one boat began sinking. “We couldn’t swim and only a few people had life jackets,” said the survivor. “Those among us who could hold on the boat’s floating hood stayed alive.”

Around 320 people were aboard the two boats, including Sudanese, Malians, Nigerians, Cameroonians, Ghanaians, Libyans, Algerians, and Egyptians.

Rescuers came by sea and air, but arrived too late for many. “On our boat, only 55 people survived,” a survivor told MSF. Only two bodies were recovered.

Many of the survivors suffered burns from fuel spillage. Others, including pregnant women and children, were taken to a migrant detention centre under Libyan authority. So far this year, at least 13,000 refugees and migrants have been funneled into a Libyan detention system that MSF calls “harmful and arbitrary”.

“Instead of receiving the support they need, refugees and migrants are arrested and detained in deplorable living conditions, without basic safeguards or legal recourse,” MSF said in a statement.

One rescued woman interviewed by MSF said she, her 10-year-old and nine-month-old decided to try to travel to Europe because life in Libya had become unbearable. “We run away only because we don’t feel safe in Libya,” she was quoted as saying. “We are afraid of human trafficking. People are afraid here. There is no freedom for us. My boy was born in prison”.

The upsurge in violence between rival armed groups in Libya also poses a threat to the migrants. “There is a real risk of mass casualties as a result of indiscriminate shelling and artillery fire,” Ibrahim Younis, MSF’s head of mission in Libya, said in a press release. “The supply of food and water has broken down and is now only being provided on an ad-hoc basis.”