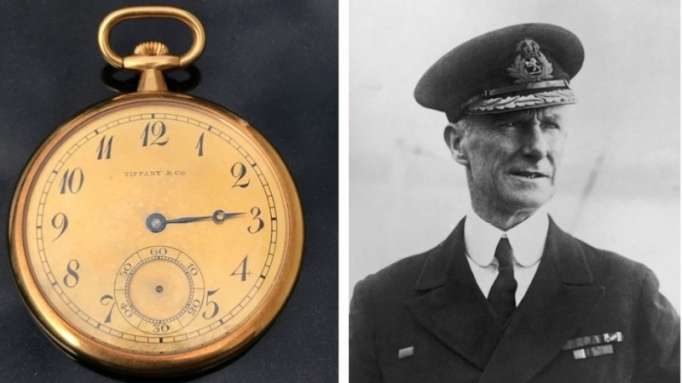 A gold Tiffany pocket watch presented to the captain of Titanic rescue ship Carpathia is up for auction in the U.K.

The watch was presented to Captain Sir Arthur Henry Rostron by the widows of John Jacob Astor, George Dunton Widener and John B. Thayer. The three wealthy businessmen were high-profile victims of the Titanic disaster. Their wives were rescued by the Carpathia.

Titanic hit an iceberg at 11:40 p.m. ship's time on April 14, 1912, and sank just over two hours later with the loss of more than 1,500 lives. Carpathia arrived at the scene of the disaster just hours after Titanic’s sinking and Captain Rostron and his crew rescued 705 Titanic survivors on April 15, 1912.

Rostron was presented with the watch during a lunch at the Astor mansion in New York in May 1912. The watch is inscribed: “Presented to Captain Rostron with the heartfelt gratitude and appreciation of three survivors of the Titanic April 15th 1912 Mrs John B. Thayer, Mrs John Jacob Astor and Mrs George D. Widener.”

The 18ct. gold watch has an enameled monogram “AHR” on its reverse.

More than 100 years after the Titanic’s sinking, the disaster continues to be a source of fascination.

In 2016, the sextant used by Rostron sold for just under $97,000. A year earlier, a cup presented to the captain by Titanic survivor Molly Brown to the Carpathia captain sold for $200,000.