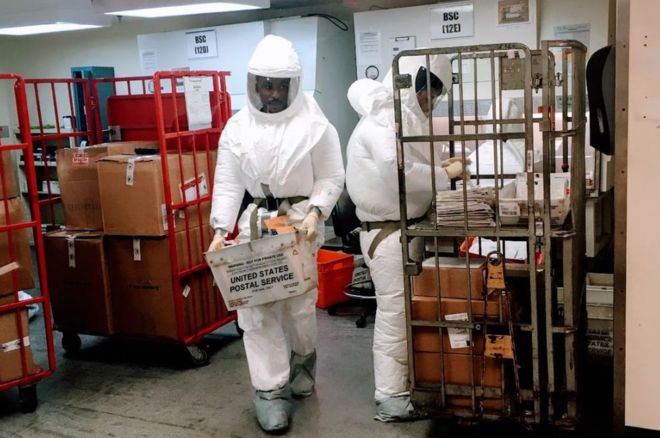 The suspicious substance that triggered a quarantine after arriving in the post at the US Defense Department was castor seeds, a Pentagon official has said.

Pentagon spokeswoman Dana White made the announcement one day after letters were also sent to the White House and a Republican senator's office in Texas.

Earlier it had been reported that the substance in the letters had tested positive for the deadly poison ricin.

Utah police have detained a man in connection to the case.

Ricin is made from castor seeds and is a by-product of castor oil production.

"According to our preliminary analysis, the substance was castor seeds, from which ricin is derived," Mrs White said in a statement.

She added that the FBI investigation continued.

The secret service said on Monday that suspicious envelopes containing the substance were sent to Defence Secretary James Mattis and US President Donald Trump.

Letters were also sent to US Navy Admiral John Richardson at the Pentagon and Senator Ted Cruz's office in Houston, Texas.

On Wednesday, Police Chief Tyson Budge said the FBI led a raid on the suspect's house earlier in the day.

Chief Budge told the BBC that the "FBI used their own tactical team" and wore hazardous material protective gear as they conducted the search in Logan, about 80 miles (135km) north of Salt Lake City.

He said that one suspect has been detained.

According to the Herald Journal newspaper, the suspect is a former US Navy sailor.

Officials say that the substance found in Texas was also castor seeds, not ricin, according to ABC News.

According to the US Centers for Disease Control and Prevention, castor seeds can release ricin and cause injury if swallowed.

The federal agency said it can be manufactured into a weapon in the form of a powder, mist or pellet.

Ricin poison is approximately 6,000 times deadlier than cyanide, and there is no antidote.