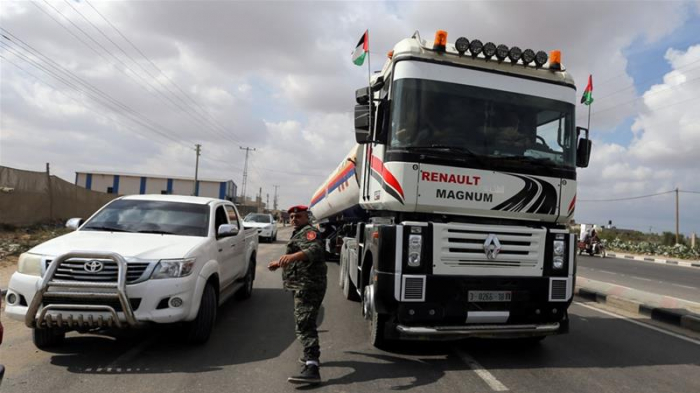 Decision comes on the same day that at least six Palestinians in the besieged enclave were killed by Israeli forces.

Israel's Defence Minister Avigdor Lieberman has ordered an immediate halt to fuel deliveries headed to the besieged Gaza Strip in response to what he said were attacks against Israeli soldiers and civilians, his office announced on Friday.

The announcement on Friday follows the killing of six Palestinians by Israeli forces during the ongoing March of Return protests.

"Israel will not tolerate a situation in which fuel tankers are allowed to enter Gaza on the one hand, while terror and violence are used against [Israeli] soldiers and Israeli citizens on the other," the statement from Lieberman's office read.

Qatari-bought fuel began arriving on Tuesday in a bid to alleviate the humanitarian situation in the besieged enclave and prevent any escalation in Israeli-Palestinian violence.

The fuel deliveries were aimed at easing months of protests along the separation fence east of Gaza, which has been under a crippling Israeli and Egyptian blockade for more than a decade.

Lieberman said the measure was in response to "riots" along the fence dividing Israel and Gaza and a midweek beach protest in which fishing boats and demonstrators gathered at the northwest end of the Gaza Strip.

The United Nations has warned that Israel's 11-year blockade of the strip has resulted in a "catastrophic" humanitarian situation.

Under the UN-brokered deal, Qatar pays for the fuel which is then delivered through Israel with UN monitoring, a diplomatic source said.

A Qatari official, speaking to Reuters news agency on Sunday, said Doha planned to help with Gaza's power crisis "at the request of donor states in the UN, to prevent an escalation of the existing humanitarian disaster".

Hamas seized control of Gaza from Abbas's Palestinian Authority (PA) in a 2007 civil war, a year after it unexpectedly won elections in the coastal enclave, triggering a crisis in Palestinian politics.

Multiple reconciliation attempts aimed at restoring the PA to power in Gaza have failed.

Hamas spokesman Qassem said that the deliveries were facilitated "through the United Nations because of the vacuum left by the PA".

Abbas says that making deals with Hamas amounts to recognising their control over Gaza in place of the PA.

Israel says its blockade of Gaza is necessary to isolate Hamas, with which it has fought three wars since 2008.