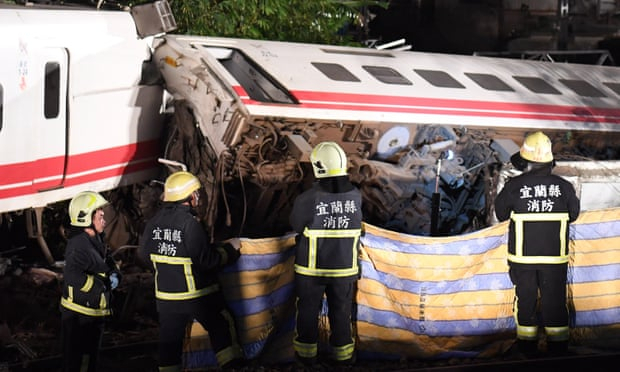 The driver of a train which derailed in Taiwan killing 18 people is under investigation after an inquiry found the train entered a turn at 140km/h (87mph), almost twice the speed limit for the section.

The driver of the train is also being investigated for negligence for allegedly disabling the automatic train protection system that would have caused it to brake, reported the official Central News Agency.

The Puyuma service came off the tracks on Monday afternoon, as it was travelling from a suburb of Taipei toward Taitung, a city on Taiwan’s south-east coast.

It was carrying more than 366 passengers when all eight carriages derailed, killing 18 and injuring almost 200, the island’s worst rail disaster in decades.

Most of the deaths were in the first car, which flipped over, a government spokesman said.

The train, which was six years old, was built to travel at 150km/h (93mph) to ease transportation on rugged parts of the mountainous island’s east coast, but the speed limit for the section on which it derailed was 74km/h (46mph). The trains are designed to tilt when going around curves.

The driver of the train, You Zhen-zhong, 48, was granted bail of T$500,000 ($16,200) after he was detained for investigation, the Taiwan Railways Administration said.

The train data recorder, which tracks speed, among other things, had been sent to prosecutors to be examined. But more investigation was needed to determine the cause, said the head of the investigation team, Wu Ze-cheng.

The disaster was Taiwan’s deadliest rail accident since a 1981 collision that killed 30 people.

The head of the state railway administration, Lu Jie-shen, had offered to resign but that was not accepted by the transport minister, the railway authority said.