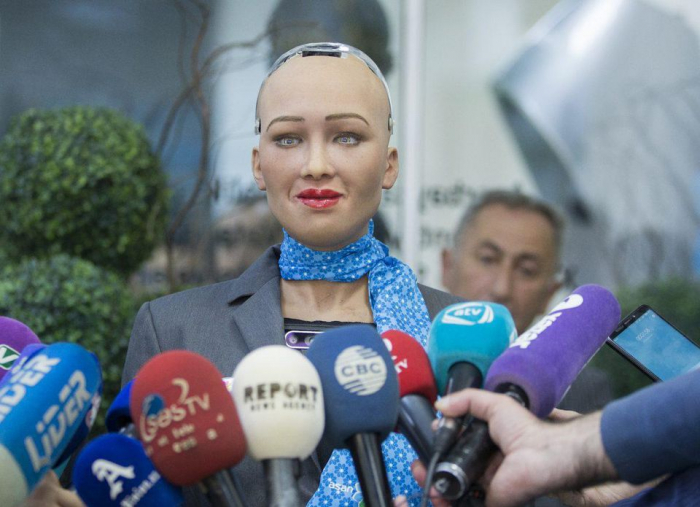 The AI humanoid, 'Sophia' (see above), has been making a worldwide tour on behalf of her creator, Hanson Robotics of Hong Kong, and made an unexpected stop to the Caucasus this week. The Caucasus stop meant granting the world's first ever visa granted to a robot, a process that took just two minutes thanks to some smart technology.

Sophia's visit was organized by UN public service award winner ASAN (Azerbaijan Service and Assessment Network) xidmet, a government agency in Azerbaijan; which has been reducing the bureaucracy by creating one-stop centres for delivering services to the public. The agency recently took over all the country’s e-government initiatives - no mean feat although in Azerbaijani, the word “asan” means easy. To underscore its electronic kinship with Sophia, and its prowess at delivering e-government services, ASAN issued her an electronic visa upon her arrival at Baku International Airport in the nation’s capital.

At an ASAN service centre, a person can register a birth, death, marriage or divorce, obtain a passport, renew a driver’s license, register a business, obtain a free legal consultation, line up medical or translation services, and much more. When Hanson Robotics asked if the next stop on Sophia’s global tour could be Azerbaijan, ASAN jumped at the opportunity.

“Sophia was a perfect fit for ASAN,” said the agency’s chairperson, Ulvi Mehdiyev. “Electronics — both hardware and software — are at the heart of what makes her tick, and we at ASAN deliver our services electronically as well.

“It’s unusual for a government agency to take the lead in delivering electronic services, but it’s vital for governments to keep ahead of the curve,” said Travis Scott, a South African engineer who is a member of the Good Technology Collective*, a European think tank whose goal is to ensure that artificial intelligence becomes a positive force for mankind and not a threat. “Most electronics and cyber trailblazers are in the private sector, not the government, so I salute ASAN.” 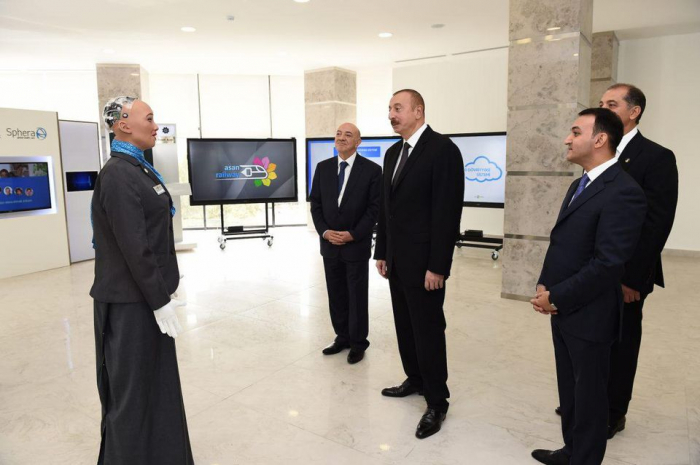 Although it garnered international publicity from issuing a visa to a humanoid, ASAN decided to go a step further and asked Azerbaijan’s president, Ilham Aliyev, to have a brief chat with Sophia when he presided over the opening of a new ASAN complex.

Sophia shared several messages with the president and responded to what he was saying. Sophia’s structural framework includes a camera that looks for visual cues such as facial expressions when deciding when to keep a conversation moving. The humanoid, whom Hanson Robotics gave an Audrey Hepburn look for this leg of the trip, started the conversation by telling Aliyev how she had obtained an ASAN visa at Baku airport and described Baku’s architecture. 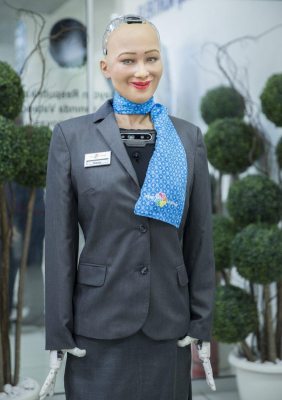 Sophia praised Aliyev for championing the ASAN initiative; “Your visit here [at the ASAN complex dedication] underscores the special attention you are giving to e-governance and the innovation ecosystem.”

The visit mainly underscored two things; firstly that the ASAN agency is harnessing the electronic and cyber worlds to make citizens’ lives better, and secondly, it further shows Hanson Robotics is capable of making a robot whose artificial intelligence can not only help it learn tasks — like cleaning — but also have robust conversations with humans.

Paul Armstrong (author) has been a member of the GTC since 2017.