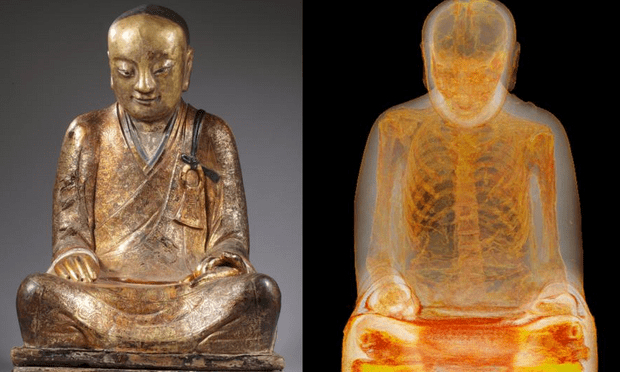 A group of Chinese villagers have travelled to the Netherlands to make a passionate plea for the return of the remains of a 1,000-year-old monk as the legal fight over its ownership wrapped up in a Dutch court.

The small eastern Chinese village of Yangchun has accused Dutch collector Oscar van Overeem of buying the stolen Buddha statue containing the mummified remains of the monk in Hong Kong in 1996.

“We grew up with the statue. He was there day and night. He is our spiritual leader,” Yangchun village spokesman Lin Wen Qing said shortly after lawyers closed their arguments at Amsterdam district court on Wednesday.

“For us, it is the most important thing to have him back,” said Lin, speaking through an interpreter. He was one of six villagers who travelled from Yangchun to attend the hearing.

The village is asking Dutch judges to rule that the human-sized Buddha statue be returned to the temple from where it was stolen in late 1995, after being worshipped there for centuries.

Missing for two decades the statue, called the Zhanggong patriarch, resurfaced in 2015 when villagers recognised it as part of a display at the Mummy World Exhibition at Budapest’s natural history museum.

A scan of the statue revealed a skeleton inside – said to be that of a Chinese monk who lived nearly a millennium ago during China’s Song dynasty. The statue was subsequently withdrawn from the exhibition.

The case is being closely watched because it could mark one of the first successful retrievals of Chinese relics in court.

The villagers said they were convinced that the statue which Van Overeem bought was their missing idol. “There is a very special bond between the villagers and the statue,” their lawyer Jan Holthuis told the judges.

Van Overeem reiterated in court that he did not have the statue, which he said he exchanged in a swap with a Chinese collector in 2015. “I swapped the statue in a transaction. I was happy to hear that it would go back to China,” van Overeem told the court, adding he did not know the identity of the collector with whom he did the swap.

He rejected Holthuis’s claims that he was in fact a dealer in Chinese art, and bought the statue in Hong Kong in 1996 – a known destination for stolen artefacts. “I’m an architect and a passionate collector. But I’m not a dealer,” van Overeem said. He said he did not know where the statue was.

Judges are due to hand down a ruling on 12 December.

Previous retrievals of Chinese artefacts have been done through diplomatic channels.

Beijing in recent years has vehemently protested against the sale of artefacts that it said were stolen, particularly in the 19th century when European powers began encroaching on Chinese territory.