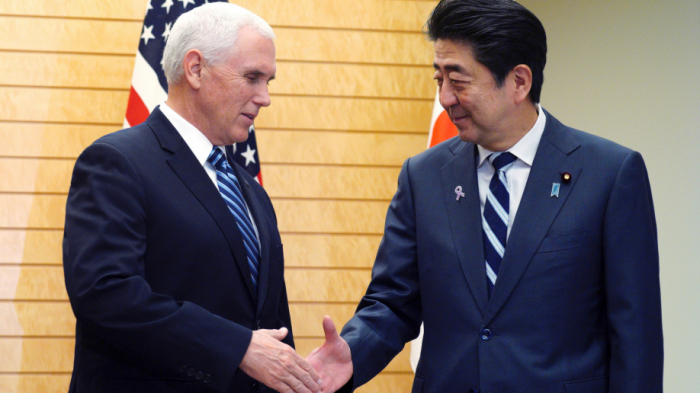 U.S. Vice President Mike Pence and Japanese Prime Minister Shinzo Abe on Tuesday reaffirmed the need to keep sanctions on North Korea to achieve its denuclearization as they showcased their bilateral alliance, while Pence also urged Japan to do more to reduce U.S. trade deficit.

Pence and Abe also agreed to deepen cooperation in promoting energy, infrastructure and providing loans to nations in the region.

Pence said the U.S.-Japan alliance is a "cornerstone" of the region's peace and prosperity and said Japan is not only an ally but a friend, but that Japan needs to do more to reduce the bilateral trade imbalance.

Japan has faced demands that it reduce its trade surplus with the U.S. and is also concerned about the impact of Trump's trade war with China.

Pence said in a recent opinion piece in The Washington Post that America will soon begin negotiations for "a historic trade agreement with Japan."

Pence and Abe gave reassurances of their cooperation on North Korea's denuclearization.

On China, Abe explained recent improvements in Japan-China relations as demonstrated in his visit to Beijing for formal bilateral summit with President Xi Jinping. Pence said the U.S. wants a relationship with China based on fairness and reciprocity, and that Japan and the U.S. will continue to cooperate closely to deal with China's increased influence in the region.

Pence was to leave later Tuesday to attend a meeting of the Association of Southeast Asian Nations in Singapore and an Asia-Pacific Economic Cooperation summit in Papua New Guinea on behalf of Trump.