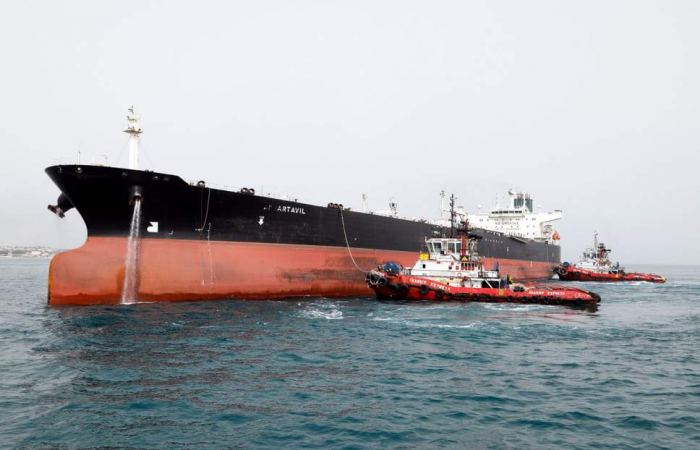 Iran's armed forces have pledged to protect Iranian oil tankers against possible threats after the US said the ships were a “floating liability” and should not be allowed to dock anywhere.

Rear-Admiral Mahmoud Mousavi, a deputy commander of the armed forces, said that they are "prepared today as in the past to protect our fleet of oil tankers against any threats so that it can continue to use marine waterways."

The remarks come days after Brian Hook, the US special representative for Iran, warned Iran’s business partners to “rethink your decision” to buy Iranian oil in the wake of Washington’s “toughest” sanctions against Tehran.

The Trump administration revived all sanctionson Iran's oil, shipping and banking industries that had previously been suspended under a 2015 nuclear deal.

The restoration of sanctions earlier this month forms a part of a wider effort by Mr Trump to force Iran to curb its nuclear and missile programmes and its support for proxy forces in Syria, Yemen and Lebanon.

“From the Suez Canal to the Strait of Malacca and all choke-points in between, Iranian tankers are a floating liability,” Mr Hook said during a press conference on Wednesday.

"Self-insured Iranian tankers are a risk to the ports that permit them to dock (and) the canals that allow them to transit.”

Mr Hook warned that some countries and port operators could face possible US penalties for facilitating Iranian ships’ access to international waterways and port facilities.

He said that Iran regularly shipped "millions of barrels of crude" to Syria in support of President Bashar al-Assad.

Currently, the US is able to pressure other nations to stop buying Iranian oil under a 2012 law that allows the president to cut off foreign banks from the US financial system unless they significantly reduce purchases.

Iranian media reported Mr Hook's remarks as a threat against the Iranian tankers that carry Iran's crude and oil products.

Mr Mousavi said that that hindering Iran’s transportation and trade through international waterways was “unacceptable” and that the army are prepared “to protect our commercial fleet ... as they have in the past 40 years”.

The deputy commander also played down Washington's rhetoric and said the US had used similar threats in the past with little effect.

Earlier this month the Trump administration said it would temporarily allow eight importers to keep buying Iranian oil after the reimposition of sanctions.

China, India, South Korea, Japan and Turkey are among the countries set to be given temporary exemptions from the sanctions to ensure crude oil prices are not destabilised.

Both Russia and China have vowed to continue purchasing Iranian oil and ignore US sanctions.