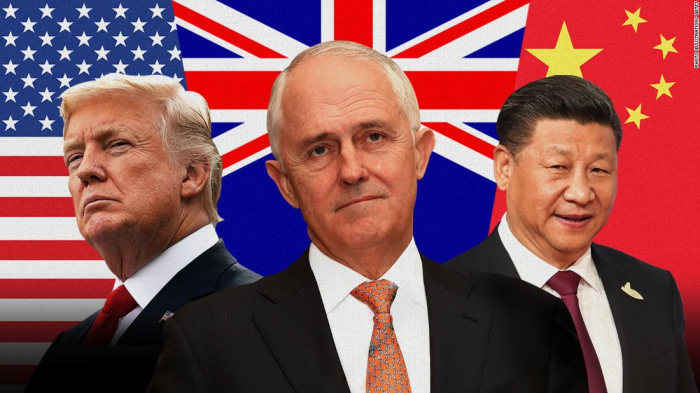 Australian Prime Minister Scott Morrison will use his first meeting with Xi Jinping to draw a line under recent tensions with China, analysts said, as Canberra straddles the fence in the growing rivalry between Washington and Beijing, South China Morning Post reports.

Morrison will rub shoulders with the Chinese president at the Asia-Pacific Economic Cooperation forum in Papua New Guinea this weekend as relations warm between the sides after one of the rockiest years for ties in recent memory. “It seems to me that both Beijing and Canberra are very keen to see an end to the freeze we’ve seen – a reset, you might call it,” said Hugh White, a defence and intelligence analyst at the Australian National University (ANU). “Morrison can’t repudiate what was done, but he has I think toned down the rhetoric far enough and been careful enough in his comments.”

Since replacing Turnbull after a leadership coup in August, Morrison, who leads the centre-right Liberal Party, has softened the rhetoric while embarking on a flurry of diplomatic activity to mend fences with Beijing.

“I think it’s important to note that differences on policy haven’t really been the problem,” said James Laurenceson, deputy director of the Australia-China Relations Institute in Sydney. “The biggest part of the problem for Australia-China relations over the last 18 months has been the rhetoric.”

Earlier this month, Foreign Minister Marise Payne and Trade Minister Simon Birmingham visited China days apart in their first trips to the country as part of Morrison’s administration. Payne’s meeting with her counterpart Wang Yi was the first by an Australian foreign minister on Chinese soil in almost three years, in what The Australian newspaper dubbed a “great leap forward” for relations.

In his first big foreign policy speech on November 1, Morrison emphasised Australia’s “vitally important” relationship with China even as he stressed the importance of a strong US presence in the Asia-Pacific. On November 12, he said Australia did not want to choose between Beijing and Washington, its biggest trade partner and principal defence ally, respectively, but would enhance relations with both. “The more stable the region is, the more prosperous the region is,” Morrison, who previously served as treasurer, told the Australian Financial Review.

“He talks about prosperity as being the No 1 priority, even ahead of security, said Euan Graham, a senior fellow at the Sydney-based Lowy Institute. “That’s an interesting nuance because it’s characteristically the first responsibility of any state to deliver security.”

Laurenceson said Morrison appeared to be signalling a return to the pragmatism of past Australian governments when it came to dealing with China.

“He said he would return to former prime minister John Howard’s approach to dealing with China, which is a very pragmatic one,” he said. “We work with them when we can, we work with them in areas where we have common interests, and we’ll set aside the differences.”

Against the backdrop of rising Chinese influence in its backyard, Australia has in recent years hewed closely to the US line on issues such as the South China Sea, while at the same time maintaining some distance from its ally. Although Canberra officially supports the right of navigation in the sea, it has not joined the US in conducting freedom of navigation patrols through the disputed waters.

“Australia’s basic strategy for the last couple of decades has been to walk both sides of the street,” said White from the ANU. “That is, we’ve been trying to assure America that we are willing to support them as they resist China’s challenge to the US role in Asia, and we’ve been trying to [convince] the Chinese we don’t.”

Morrison has notably not emulated the Trump administration’s increasingly combative rhetoric toward Beijing, typified by Vice-President Mike Pence’s recent anti-China speech that drew comparisons to the barbs traded between Washington and Moscow during the cold war. In his recent foreign policy speech, Morrison went as far as to warn of the risk of China-US ties being “defined by confrontation”.

“That’s a new message, that’s a pretty significant message,” White said, adding that this led to the freeze being relaxed with the first visit by Trade Minister Birmingham and then Foreign Minister Payne some weeks back.

“He’s gone out of his way to make it clear that he values the relationship with China and he’s not prepared to line Australia up in an anti-China coalition and that’s exactly what Beijing wants to hear.”

Even where clear points of contention with Beijing exist, Morrison has indicated a preference for quiet diplomacy over public confrontation. Asked whether he would challenge Xi on the mass detention of Uygurs in Xinjiang, which has ensnared at least three Australian citizens, Morrison said he would discuss human rights concerns but not engage in “showboating”.

At the same time, Morrison has given little reason to suggest a major shift in policy towards China. Australia’s effort to counter investment by Beijing in tiny island nations like Tonga and Vanuatu still stands – last week, the prime minister announced A$2 billion (US$1.45 billion) in new grants and loans for Pacific nations.

Under Turnbull, Canberra openly voiced disquiet about China potentially undermining the sovereignty of developing nations residing within Australia’s traditional sphere of influence by providing them with unsustainable loans. In a sign of tensions lurking beneath the surface, Chinese Vice Foreign Minister Zheng Zeguang on Tuesday called on Australia to abandon a “cold war mentality” when it came to the Pacific islands. In China’s state-owned Global Times on the same day, Yu Lei, a research fellow at the Research Centre for Pacific Island Countries, questioned whether Australia was serious about the “healthy and lasting development” of positive relations.

“The South Pacific will loom larger than any other geographical backdrop to the meeting and Australia is fighting to regain and retain its influence, especially when Xi Jinping is rumoured still to be planning a second set of summits with South Pacific leaders while he’s there,” said the Lowy Institute’s Graham.

So even as ties between Canberra and Beijing look to return to an even keel, questions remain about the long-term sustainability of Australia’s balancing act between superpowers.

“When I look at the US, I see a country that is struggling to adjust to the rise of another major power, and it wouldn’t surprise me at all if we get some pressure,” said Laurenceson from the Australia-China Relations Institute, referring to the likelihood of future demands by Washington for Canberra to choose a side.

“We do think the US presence in Asia is very important to our security, and as long as that fundamental division [exists] between China’s basic strategic objectives and Australia’s, then there’s always going to be, if you like, a problem there,” said the ANU’s White. “No one wants to back a loser in this race.”


More about: Australia   China   US