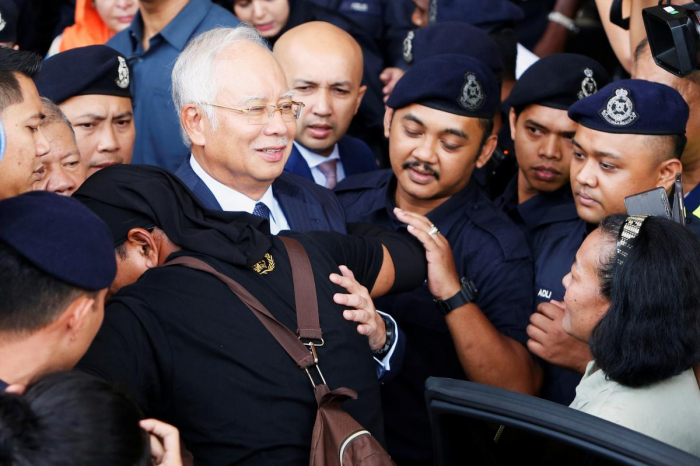 Since losing a May election, Najib has been charged with multiple criminal offences and has been subject to corruption investigations, some linked to a multi-billion dollar scandal at state fund 1Malaysia Development Berhad (1MDB).

Najib has pleaded not guilty to all charges.

Investigators with the Malaysian Anti Corruption Commission (MACC) are now also looking at whether there had been any kickbacks in the sale of two Scorpene-class submarines to Malaysia by French warship builder DCN International (DCNI) in 2002, when Najib was defense minister, according to local daily The Star citing MACC sources.

One source cited by The Star said Najib was summoned to give a statement on the submarine deal on Monday and that investigators will be taking statements from others, including Najib’s former aide, Abdul Razak Baginda, who is being investigated by French financial prosecutors over the deal.

French authorities began investigating the deal after Malaysian human rights group Suaram alleged the sale resulted in some $130 million of commissions being paid to a company linked to Najib.

Last August, French prosecutors said they had placed two former executives at Thales and DCNS under preliminary investigation as part of a probe into the 2002 submarine sale.

A spokesman from Thales declined to comment at the time.

A spokesman for Naval Group also declined to comment but added: “We scrupulously respect all the relevant national and international legislations”.

Earlier investigations by Malaysian authorities did not find any evidence linking Najib directly to corruption in the deal.

Najib’s aides did not respond immediately to requests for comment. Najib and his supporters have consistently denied any wrongdoing in the submarine deal.

The 1MDB scandal was one of the major reasons for Najib’s election defeat. The fund is the subject of corruption and money-laundering investigations in at least six countries.

U.S. authorities say $4.5 billion was siphoned from 1MDB and about $700 million was diverted into Najib’s personal bank accounts. He has denied any wrongdoing.