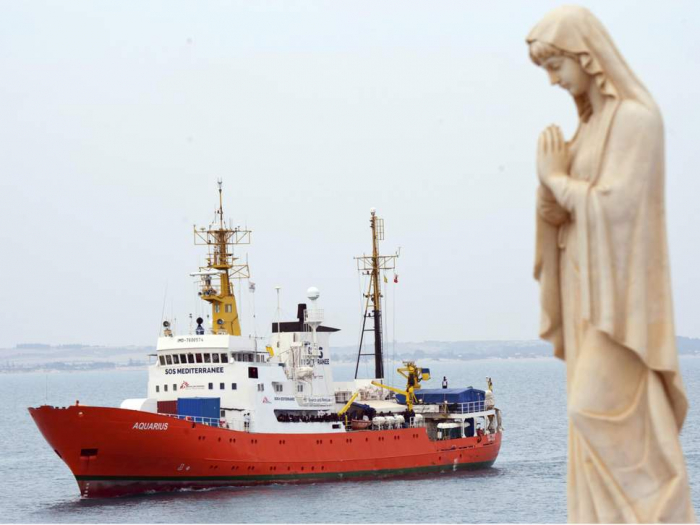 Italian authorities have upped the ante in their war against ships rescuing migrants drowning in the Mediterranean by ordering the seizure of one of the vessels on spurious health grounds.

Italy’s government, fronted by far-right interior minister Matteo Salvini, has waged a campaign against ships like the Aquarius, closing ports to the rescue boats and frustrating charities’ efforts.

On Tuesday regional prosecutors baselessly claimed that the ship could bring infectious diseases such as HIV, meningitis and tuberculosis into the country on the clothing of migrants.

A total of 24 people associated with the Aquarius, including the ship’s captain, have been put under investigation for “trafficking and illegal management of waste” based on the technicality that the clothing was labelled as “special waste” rather than “toxic waste” by the ship’s crew.

The orders come despite international health authorities rejecting the idea that any of those diseases can be transmitted through clothing.

The US Centres for Disease Control says that “it takes close or lengthy contact” such as kissing to spread meningitis bacteria, while tuberculosis “is transmitted through the air, not by surface contact” and “you cannot get TB from someone’s clothes”.

The idea that HIV can be spread through clothing is also a myth. Deborah Gold, chief executive of the National Aids Trust, told The Independent: “Clothing categorically is not, and has never been, an HIV transmission risk.

“This would have stood out as ridiculous even amongst the misinformation of the 1980s, never mind in 2018. Migrants and people seeking asylum have historically been attacked using myths about HIV and infectious conditions, and we condemn this both for its stigmatising of people living with HIV and of migrants fleeing hardship.

“It’s a bitter irony that we are still seeing this as we approach the 30th World Aids Day. This is shocking to hear and we would urge the authorities involved to withdraw these orders, allow MSF to continue its lifesaving work, and issue an apology for spreading this dangerous nonsense, which damages on-going international efforts to raise awareness.”

But reacting to the news of the court order, Mr Salvini, the interior minister and the most high-profile face in the country’s government, said: “It seems I did well to close the Italian ports to the NGOs.”

Since coming to power Mr Salvini has also launched a census of Italy’s Roma minority with a view to deportations, and suggested “ethnic” shops should have restrictions placed on their opening hours.

The Aquarius is currently in port in the French city of Marseilles and beyond the reach of the Italian authorities. But prosecutors from the city of Catania in eastern Sicily said: “If Aquarius would disembark to Italy, it will be immediately put under seizure.”

In September the vessel’s flag was revoked by Panama after pressure from the Italian government.

Karline Kleijer, head of emergencies at MSF, which jointly operates the vessel, said: “After two years of defamatory and unfounded allegations of collusion with human traffickers against our humanitarian work, we are now accused of organised crime aimed at illicit waste trafficking. This latest attempt by the Italian authorities to stop humanitarian lifesaving search and rescue capacity at any cost is sinister.”

Frédéric Penard, SOS Mediterranee’s head of operations, said: “This is another strike in the series of attacks criminalising humanitarian aid at sea. The tragic current situation is leading to an absence of humanitarian search and rescue vessels operating in the central Mediterranean, while the mortality rate is on the rise.”