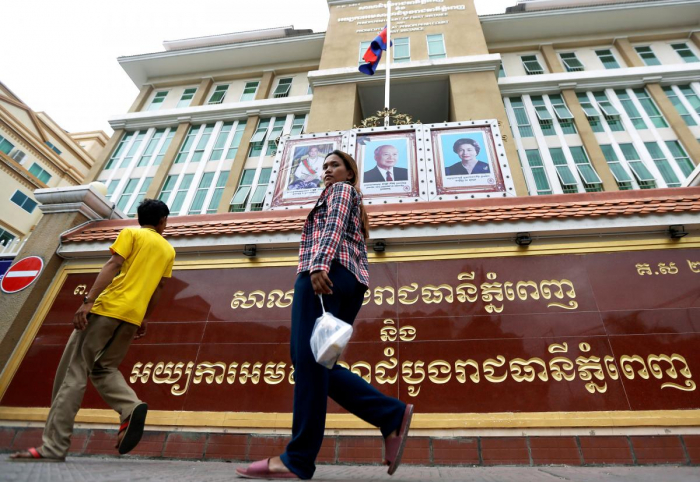 A Cambodian court found six union leaders guilty on Tuesday of instigating violent protests against the government in 2013 and 2014, but suspended their jail terms.

A Cambodian court found six union leaders guilty on Tuesday of instigating violent protests against the government in 2013 and 2014, but suspended their jail terms.

Striking workers and the now dissolved opposition Cambodia National Rescue Party (CNRP) had marched against Prime Minister Hun Sen’s government to demand a re-run of a July 2013 election that the opposition said was rigged.

During one protest in 2014, military police fired on stone-throwing textile workers who were also demanding higher wages. A human rights group said at least four people were killed and more than 20 wounded.

The Phnom Penh Municipal Court on Tuesday found six union leaders guilty of initiating intentional violence and causing damage in the 2013-2014 protests. They were given suspended jail terms of between eight months and four and a half years.

“All of these jail terms are suspended,” Judge Im Vannak told the court, without elaborating. He ordered the union leaders, who did not appear in court, to pay a total of $8,692 in compensation to people injured in the 2014 clash.

Representatives from apparel and footwear companies, including Adidas, Nike and Puma, had urged the government to drop what are seen as politically motivated criminal charges against trade unionists.

The labor leaders said on Tuesday they would appeal their convictions, which effectively bans them from leading a union.

“We can’t accept this criminal conviction record. The situation is now more tense than before,” said Ath Thon, the president of the Coalition of Cambodian Apparel Workers’ Democratic Union, who was among those found guilty.