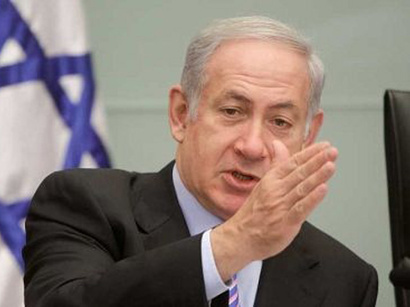 "They`re edging up to the red line. They haven`t crossed it yet," Netanyahu said on Sunday on CBS News`s "Face the Nation."

"They`re getting closer and closer to the bomb. And they have to be told in no uncertain terms that that will not be allowed to happen."

Netanyahu went on to say that Israel had a more narrow timetable than Washington, implying it may have to take unilateral action to halt Iran`s controversial nuclear program.

"Our clocks are ticking at a different pace. We`re closer than the United States. We`re more vulnerable. And therefore, we`ll have to address this question of how to stop Iran, perhaps before the United States does," he said.

Netanyahu said Tehran has been building "faster centrifuges that would enable them to jump the line, so to speak, at a much faster rate - that is, within a few weeks."

Netanyahu said Iran`s nuclear policies were unlikely to change under its next president, moderate cleric and former nuclear negotiator Hassan Rowhani, who will assume power on August 3.

"He`s criticising his predecessor (President Mahmoud Ahmadinejad) for being a wolf in wolf`s clothing. His strategy is be a wolf in sheep`s clothing. Smile and build a bomb," Netanyahu said.

He urged the United States to make clear to Rowhani that it will not allow Iran to build a nuclear weapon, and that military force "is truly on the table."

"We`ve spoken many times, President Obama and I, about the need to prevent Iran from getting nuclear weapons," Netanyahu said.

"What is important is to convey to them - especially after the election - (is) that (the) policy will not change," he said.

"If sanctions don`t work, they have to know that you`ll be prepared to take military action -- that`s the only thing that will get their attention," he added.

Iran for years has been at loggerheads with world powers over its nuclear drive, which Western nations believe is aimed at developing an atomic weapon capability.

Tehran insists its nuclear programme is entirely peaceful, but the sanctions imposed over the standoff have isolated it internationally.