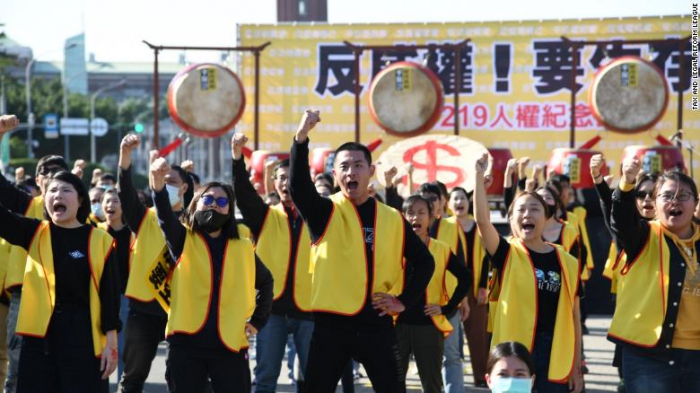 Inspired by the French movement, Taiwan's own "yellow vest" protests are expected to continue on Saturday, with anti-tax demonstrators preparing to take to the streets again, CNN reports.

Supporters of the Taiwanese Tax and Legal Reform League -- each donning a trademark "gilet jaunes" (yellow vest) -- first marched on Taiwan's Presidential Office in the capital Taipei on Wednesday.

It comes after "gilet jaunes" demonstrators took to the streets of Paris for weeks in occasionally violent protests that forced concessions on tax and other issues by French President Emmanuel Macron earlier this month.

A league spokeswoman told CNN the march was aimed at pressuring the Taiwanese government to make the tax system more transparent. The group also protested the Ministry of Finance, for what they regard as an unfair policy of levying taxes and for delaying the implementation of tax exemption arrangements.

Protesters adopted the yellow garments made famous by anti-government protesters in France.

The league was founded in 2016 and has been pressuring the government ever since -- but organizers said Wednesday's march marked the first time they had worn yellow vests.

"We were touched by the French movement, and decided to go to the streets in yellow vests," said the spokeswoman, who gave her surname as Wang. "We hope that (Taiwanese President) Tsai Ing-wen will listen to people's grievances and give concessions just like Emmanuel Macron did."

Wang said "unfair" taxation had deterred foreign businesses from investing on the island. The league's next protest will happen outside the Ministry of Finance headquarters in Taipei on Saturday.

The Ministry did not respond to a request for comment from CNN.