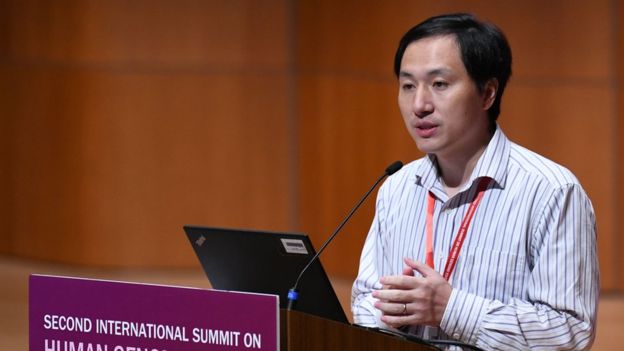 China says the scientist who claims to have created the world's first genetically edited babies last year acted illegally and in pursuit of fame and fortune, state media report.

He Jiankui's claim to have altered twin girls' genes so they could not get HIV was met with scepticism and outrage.

Investigators say the researcher faces serious punishment after acting on his own and forging ethical review papers.

Professor He, who is reportedly under house arrest, has defended his work.

In November, he told a genome summit in Hong Kong he was "proud" of his gene-editing work, a practice which is banned in most countries, including China.

His announcement was met with condemnation from hundreds of Chinese and international scientists, who said any application of gene editing on human embryos for reproductive purposes was unethical.

What does China say?

Prof He's claims had not been verified, but investigators confirmed on Monday that his work had resulted in the birth of twin babies, and that another woman was currently pregnant.

Investigators from Guangdong provincial government said the doctor had raised his own funds, deliberately avoiding oversight.

Image copyrightAFPImage captionProf He announced the birth of twins in November
He had also allegedly used technology of an uncertain safety level in order to carry out human embryo gene editing.

They said baby twins nicknamed Lulu and Nana were born in November, and are under medical supervision.

Since Prof He's announcement of his experiment, he is said to have been placed under house arrest in Shenzhen.

What has the scientist claimed?

Speaking to the Human Genome Editing Summit at the University of Hong Kong, he said the girls had been "born normal and healthy" and they would be monitored over the next 18 years.

He said he had funded the experiment himself and confirmed his university, the Southern University of Science and Technology in Shenzhen, had not been aware of it.

Prof He also explained that eight couples - comprised of HIV-positive fathers and HIV-negative mothers - had signed up voluntarily for the experiment.

One couple dropped out, but there was "another potential pregnancy" of a gene-edited embryo in its early stages.

He said his study had been submitted to a scientific journal for review, though he did not name the journal. He was also evasive about other details, including the names of "some experts" who, he said, had reviewed his work and offered feedback.