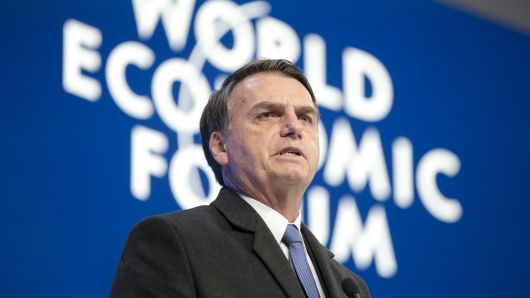 Brazil’s far-right president, Jair Bolsonaro, has used his international debut to sound the death knell for South America’s “Bolivarian” left and proclaim a new, conservative era of clean governance and godliness in the region.

But his terse and widely-panned appearance at the World Economic Forum on Tuesday was overshadowed by a snowballing scandal back home involving one of his sons, the recently-elected senator Flávio Bolsonaro.

As the president – who came to power vowing to free Brazil from corruption and criminality – prepared to take to the stage in Davos, reports in one of Brazil’s leading newspapers linked his son with members of a Rio de Janeiro death squad called the Escritório do Crime (The Crime Bureau).

Rio broadsheet O Globo claimed that during Flávio Bolsonaro’s time as a Rio lawmaker, he had employed both the mother and wife of the gang’s alleged leader, a former special forces agent called Adriano Magalhães da Nóbrega.

Nóbrega, who is reportedly on the run after police targeted his group with an operation dubbed ‘The Untouchables’, is alleged to be a senior member of what O Globo called Rio’s “most lethal and secretive phalanx of hired guns”.

Police and prosecutors reportedly suspect members of The Crime Bureau were behind the still unsolved murder of Rio councillor Marielle Franco last year.

O Globo also claimed that the alleged gangster’s wife and mother had been recommended to Flávio Bolsonaro by Fabrício Queiroz, a longstanding friend of Brazil’s president who has been pictured socialising with Jair Bolsonaro in a photo where both men appear topless.

Marcelo Freixo, a leftist lawmaker and friend of Marielle Franco, was among those demanding answers on Tuesday. “The Bolsonaro family owes society explanations,” he tweeted.

Flávio Bolsonaro rejected the report – which follows a trickle of other damaging allegations about his financial dealings – and claimed he was the “victim of a defamation campaign” designed to hurt his father. “Those who have made mistakes must be held accountable for their acts,” he said in a statement.

Celso Rocha de Barros, a political columnist for the Folha de São Paulo newspaper, said: “The Bolsonaro family must be in panic.”

“It’s hard to measure the repercussions this might have … It’s a bomb – a nuclear bomb,” de Barros added.

The growing scandal jarred with Jair Bolsonaro’s claims in Davos to be spearheading a crusade against corruption and organized crime.

During an unusually brief six-minute address to the annual summit, Bolsonaro said he hoped the world would see his “new” cleaner Brazil with fresh eyes after a massive corruption scandal that has ravaged the country’s political elite.

“I took over a Brazil in the midst of a profound ethical, moral and economic crisis. We are committed to changing our history … We want to govern by example,” Bolsonaro declared.

The far-right nationalist pitched himself as a flag-bearer for Latin America’s new conservative vanguard. “We do not want a Bolivarian America,” he said, in a reference to Venezuela’s late president Hugo Chávez, who hoped to unite the continent with an alliance of progressive leaders.

Bolsonaro said that rightwing leaders such as Argentina’s Mauricio Macri and Chile’s Sebastián Piñera were determined “the left will not prevail in this region”.

The Brazilian president also painted himself as a global statesman seeking “a world of peace, liberty and democracy”. “With the slogan: ‘God above all else’, I believe our relations [with the world] will bring unending progress for all,” Bolsonaro declared.

Political observers and audience members were unimpressed by Bolsonaro’s coming out on the world stage.

“He scares me … Brazil is a big country and deserves someone better,” the Nobel-winning economist Robert Shiller was quoted as saying by Valor Econômico, Brazil’s top financial newspaper.

Another audience member reportedly complained: “[A] disaster. I wanted to like him but he said nothing. Why did he even come?”

De Barros called Bolsonaro’s short address a generic “fiasco” that had likely been cut because of the scandal unfolding back home.

“Consumer confidence is the highest in years … money is coming in from overseas. The dollar has gone down. The stock market is breaking records … No-one can bear another five years of crisis. Everyone wants to press the restart button.”

But he speculated that Bolsonaro would pay a political price for the growing whiff of corruption surrounding his son. “Flávio has put a sword [of Damocles] over his father’s head that will be used to blackmail him, in congress, in the courts, on social media and in the press. It will be a weight he will always have to carry – and the likelihood is for that weight to grow with time.”