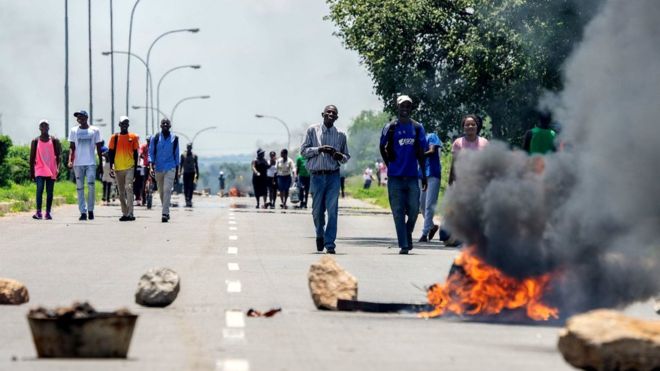 A government-appointed human rights group in Zimbabwe has accused soldiers of using "systematic torture" in a crackdown on protests, BBC reports.

Unrest broke out more than a week ago following a sharp rise in fuel prices.

Reports have emerged of assaults allegedly carried out by the military in various parts of the capital, Harare.

The BBC's Andrew Harding in Harare spoke to a man who said he and about 30 others had been rounded up and beaten by soldiers.

The continuing violence raises further questions about President Emmerson Mnangagwa's control over the military, which helped to bring him to power 14 months ago, our correspondent adds.

President Mnangagwa has promised that abuses against civilians will not be tolerated.

In a blunt statement, the commission said at least eight deaths had been reported since last week, "mostly attributed to use of live ammunition".

"Armed and uniformed members of the Zimbabwe National Army and the Zimbabwe Republic Police instigated systematic torture. The torture was organised in that they targeted men who stay near areas where barricades had been placed and near areas that were torched by protesters or looted," it said.

The commission detailed reports of security forces entering houses at night and making men, and even boys as young as 11, lie on the ground where they were then beaten.

"The deployment of the army in quelling civilian disturbances leads to loss of life and serious bodily injuries and other human rights violations, yet the government continues to make such deployments," the statement said.

Other reports say at least 12 people have been killed and scores treated for gunshot injuries.

On Monday Mr Mnangagwa, 76, broke off a trip to Europe to deal with the continuing unrest.

He had been due to attend the Davos economic summit where he was expected to seek investment for Zimbabwe.

Back in Harare, he took to Twitter to urge all sides to work together to fix a broken economy.

In a series of tweets, he said violence or misconduct by security forces was "unacceptable and a betrayal of the new Zimbabwe", adding: "If required, heads will roll."

Mr Mnangagwa announced a steep increase in the fuel price earlier this month.

The price rises were meant to tackle fuel shortages, but mean that Zimbabwe now has the most expensive fuel in the world, according to GlobalPetrolPrices.com.

Many Zimbabweans, worn down by years of economic hardship, have suddenly found they cannot even afford the bus fare to work.

This led to angry protests in Harare and the south-western city of Bulawayo.

It accuses the opposition MDC party of using the protests for political means.

Presidential spokesman George Charamba said on Sunday: "The MDC leadership has been consistently pushing out the message that they will use violent street action to overturn the results of [last year's] ballot."

The opposition rejected a court ruling in August 2018 that confirmed that President Mnangagwa had defeated MDC leader Nelson Chamisa.

he MDC said on Tuesday that five of its MPs had been detained and refused bail.

Party official Morgen Komichi dismissed Mr Mnangagwa's announcement of an investigation into security forces, saying: "We don't trust his word. We don't regard him as an honest leader."

The Zimbabwe Congress of Trade Unions, the umbrella group that called the protests, says its leader Japhet Moyo has also been arrested.

Mr Chamisa told the BBC there was "no justification whatsoever of having soldiers with live ammunition, with guns, machine guns, AK47 on the streets, beating up citizens".

"People are being approached in their homes, they are being taken out of their homes with their families even if they are sleeping... a lot of people have been arrested for no apparent reason," he said.